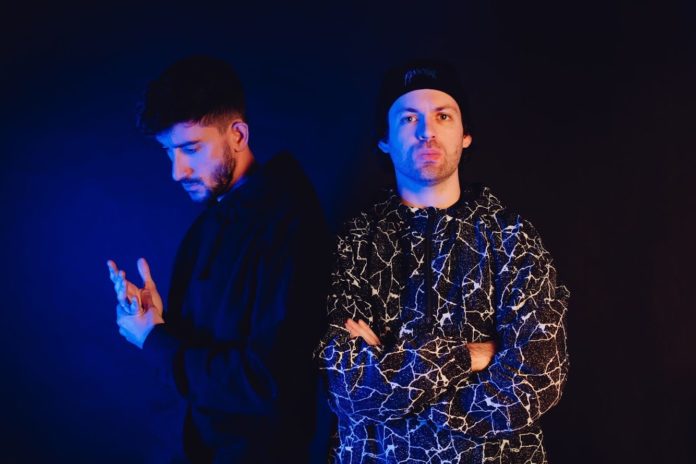 Subshock & Evangelos are bolting in with their label debut on Bassrush Records by way of a kinetic drum & bass single, “Runaway.”

Juan Rocco and Alvaro Murillo Sánchez are the culprits behind Subshock & Evangelos, a Spanish- and Belgium-based duo that has been charting a course across the entire dance music spectrum. The highly adaptive production pair has continually blitzed their way through the dancefloor, knocking down almost every genre barrier standing before them. While different variants of house music have become their specialty, namely of the bass-laden variety, no style seems to be safe when ideas are flowing in the studio. The proof is in the prolific discog they’ve built for nearly a decade, which is littered with an array of tracks spanning psytrance, electropop, hard dance, garage, dubstep, trap, and, well, you name it. Along the way, they’ve made some solid strides in the drum & bass space, stretching back to their first D&B effort in 2016, “Legends,” offered up on their own event and label collective, DOPE SQVAD. They’ve made it a point to check that box periodically, and they are now running up with a new cut that has the legs to go the distance.

“Runaway” hits on an emotional level, written while they were battling cabin fever during the height of stay-at-home orders. With the prospect of dancefloors opening back up barely out of reach, their new single opens up an escape route into the overwhelming relief waiting for the world once sheltering-in-place becomes a thing of the past. Straight off the line, a strong-willed vocal leads the way through suspenseful cinematic pads and juddering chords working in tandem to pile on the tension. A stomping melodic lead announces itself as the official guide to this getaway, as the galvanizing riff climbs up a crescendo until it’s time to make a run for it. The tunnel vision sets in immediately, at which point tightly woven percussive patterns and whooshing synth phrases keep the momentum pushing passed any sign of clear and present danger. It’s a nail-biting thrill that, at the very least, will add some much-needed excitement until quarantine ceases to blur the days together.

“We are extremely excited about releasing one of our very favorite productions on a label that we have been looking forward to working with for a really long time,” says Subshock & Evangelos. “We honestly can’t wait to play this one out and see how the crowd reacts.”

Some might remember the duo from their recent Insomniac Music Group appearance, when they put their flexibility to the test on their splintered two-track EP, ‘Want U,’ via the gamer-centric imprint, Night Mode. The release perfectly showcased their ability to make sharp turns from hammering out blazing house grooves to tearing it out on the drum & bass tip. This unrivaled mobility has allowed them to gain support from across from board, turning top-tier heads such as Tiësto, Marshmello, The Chainsmokers, Don Diablo and more.

With another anthemic drum & bass offering now tossed into their arsenal with “Runaway,” it’s getting increasingly difficult to not get left in the dust by the out-of-the-box project that is Subshock & Evangelos. But it’s worth it in the end if you’re able to keep up.