9 Things To Talk About: TOR 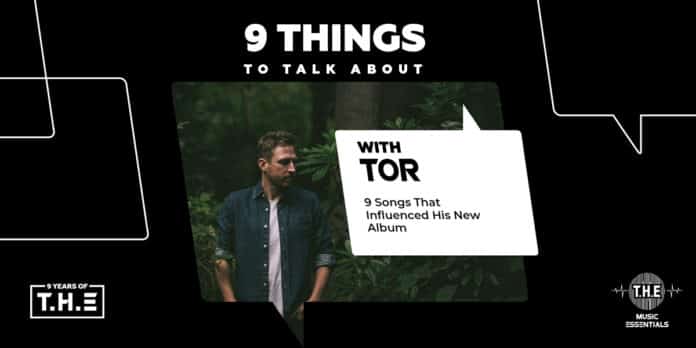 As part of our 9 Years Of T.H.E celebration features, we caught up with TOR who shared 9 songs that have influenced the creative process for his new, upcoming album.

Early on in the writing process for the new album, I would put this song on in the studio before starting any projects and it would help to get my head into a really musical place. There’s something about the piano in this that is just pure music, and since then I’ve become very into instrumental piano music and I usually have my ‘piano favourites’ playlist on in the mornings and any time I need to relax.

This song immediately stood out when I first heard it, the chords and drum pattern are so unique and beautiful. It really got me into the idea of half-time drums at faster tempos, and all of the interesting rhythms you can fit between the new spaces that open up.

This song inspired a lot of my experimentation with synths on the new album. The shape and sound of the chord stabs and how they’re stacked together just blew me away.

Ambassadeurs album “Human Stranger” was one of my favourites from 2020, and the rhythm and sounds of the sampled Japanese Koto in this tune were super inspiring. When I was looking up the track afterwards, turns out there’s a whole project breakdown that he recorded for Future Music and I picked up some new techniques that broke me out of my sampling rut that had formed after doing things the same way for a long time!

There’s a kind of warmth and innocence to this song that really gets to me. To me it’s just music in its purest form.

This track is just a great big percussion jam, and the rhythms and sounds really landed for me. I only discovered this tune after lockdown but I can’t wait to play it out in a DJ set, and everything she has released since has been incredible.

Ólafur Arnalds has been a massive inspiration for years, and this track was very influential while I was writing my album. The way the piano notes move around the vocal and fade in and out is so good, it just doesn’t get any better than this.

I’ve been a fan of Machinedrum for many years and he keeps getting better and better. His new album and this song are some of the best music he’s made, and I love everything about this track. The ambient pads and the filtered acoustic guitar along with 170bpm drums are just fantastic.

This may be my most played track over the past year. During the first few months of the pandemic I got into meditation for the first time in my life and it helped so much to calm my mind and slow down, and eventually got me back into the headspace to keep writing music and finish the album. The sound of the bowls in this recording are otherworldly and definitely helped me get through 2020.