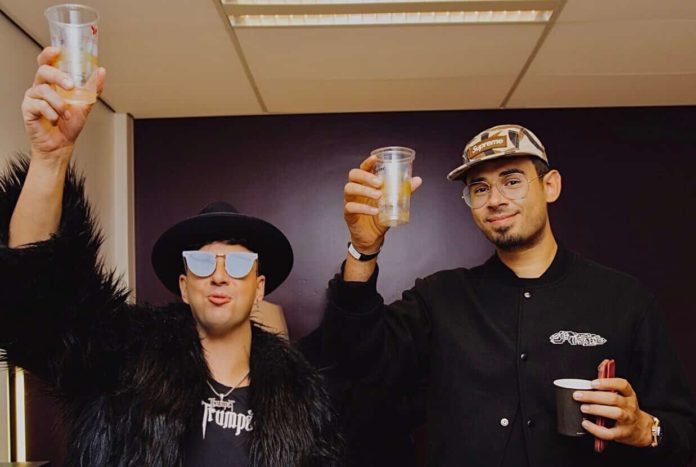 Two of the world’s most renowned dance artists Timmy Trumpet and Afrojack have joined forces for an incredible new single: ‘Stay Mine’.

It’s been a long time coming, the inevitable collab between Timmy Trumpet and Afrojack. Both have been performing at the world’s biggest mainstages, while playing a seminal role in the development of dance music, exploring various sounds from big room house to psy trance, as well as deep underground genres and straight up pop music.

Australian DJ/producer/live instrumentalist Timmy Trumpet has scored numerous hits these last years, including massive festival tunes such as ‘Freaks’, ‘Party Till We Die’ together with MAKJ and Andrew W.K., ‘Oracle’, and last year’s hit tune ‘Paul Is Dead’, a team up with legendary act Scooter.

That same year, he also launched his own SINPHONY label, where he released debut album ‘Mad World’ to critical acclaim (already clocking over 100 million streams on Spotify alone). While still reaching millions of his fans through his music and live stream (his April 2020 stream became one of the most watched electronic performances of the year), Timmy Trumpet can safely be called a dance music phenomenon, recently climbing to #10 on the famous DJ Top 100.

Which makes a team up with Afrojack, the widely celebrated Dutch DJ/producer currently ranked #7 on that same list, the more exciting. He’s surely one of the most popular dance music acts of today and a sought-after producer. Throughout the years, he has worked with everyone from Pitbull to Sting and Beyoncé, won a Grammy for his and David Guetta’s remix of Madonna’s ‘Revolver’, and released an array of diverse hits.

With the return of his WALL Recordings to Spinnin’, back in 2020, he also kicked off a new chapter of fresh, inviting records, often teaming up with young, upcoming artists. In the meantime he kept dropping smash hits, including featurings on Chico Rose hit ‘Sad’ and the Yves V hit tune ‘Drop That Cool’ (together with Icona Pop).

So, what happens when two of these major forces bring together their productional skills. You’ll end up with ’Stay Mine’, a record that’s definitely something out of the ordinary.

Kicking off with cool throbbing bass chords, the record builds momentum with powerful vocals, moody synths and subtle, 80’s styled drums. When progressing towards the chorus, the beat drops into a incredible pulsating rhythm, enhancing the bass line with warm sound effects and a sweet pop hook.

All together, ‘Stay Mine’ delivers energy with its electronic groove, uplifting drum fills and undeniably cool bass chords. At the same time, there’s a feeling of longing that overshadows the song; an emotional message in the vocals, and an expression of melancholy when beautiful, muted horns guide you to the end of the record.

Timmy Trumpet aims for the heart this time, while not forgetting to make you move in the meantime. And he chose the ideal partner for it; Afrojack brings his best sounds to the table, making sure there’s a 2021 instant classic about to be unleashed. It will stay yours forever.