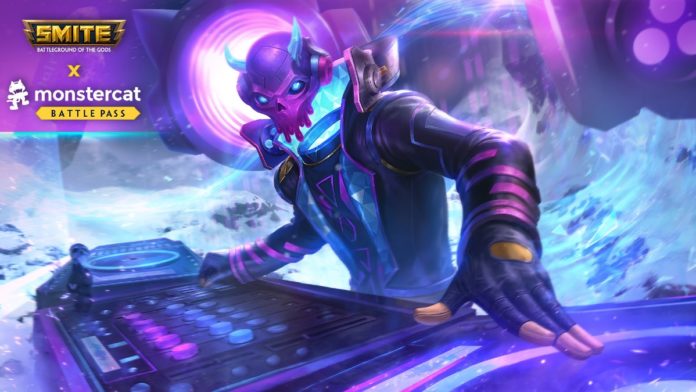 Within the Monstercat Battle Pass, Slushii’s skin transforms Hades, the Greek King of the Underworld, into a DJ with a set of turntables and Monstercat-themed speakers, while Egyptian scarab god Khepri becomes a dancing crab in a skin inspired by Noisestorm’s “Crab Rave.” Each skin features music from the artist throughout the gameplay experience, replacing ability sounds with drum & bass, tropical house, and more.

The Monstercat Battle Pass also contains four full Music Themes, allowing players to completely replace SMITE’s default soundtrack with Monstercat tracks. Choose from the forthcoming Slushii track “Valhalla,” the Gold-certified internet classic “Crab Rave” by Noisestorm, the romantic liquid drum & bass of Koven’s “Give You Up,” or the heavy-hitting grit of Sullivan King’s “Someone Else.”

Gavin Johnson, Monstercat’s Head of Gaming adds, “We’re excited for players to directly engage with our artists and experience their music through these unique integrations launching inside the SMITE universe. Each of the skins in the Monstercat Battle Pass are authentically aligned with the artist’s brand and the game’s creative elements, a synergy we strive for in all of our partnerships.”

Fans of Monstercat and the artists will find even more fun surprises to explore in the Battle Pass. Purchasers can replace the game’s default announcer with Sullivan King’s sultry growls, or launch firework-style dancing crabs into the air. Thematic elements of Monstercat’s whimsical Lost Civilization origins story can also be seen throughout the game.

SMITE’s unique blend of third-person action combat and Multiplayer Online Battle Arena (MOBA) strategy has attracted more than 35 million players to the Battleground of the Gods. SMITE features an ever-growing roster of 100+ Gods and Goddesses from pantheons around the world and throughout history, and is free to play on PC, Xbox, PlayStation, and Nintendo Switch.

The Monstercat Battle Pass will become available for purchase in SMITE next month. The full reveal of the crossover skins and more information about the Battle Pass will be broadcast live on twitch.tv/SMITEGame on April 28, at 3 p.m. EDT, during the SMITE Update Show.