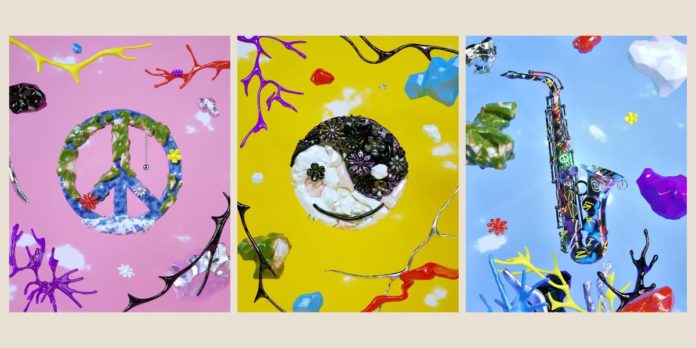 Multi-instrumentalist electronic producer and multi-medium creative GRiZ, AKA Grant Kwiecinski, today has announced his entrance into the NFT space with “SEROTONIN BOOST”, an audio-visual collaboration with Russian artist and designer Kitasavi.

In true GRiZ style the offering fuses bespoke audio content, colorful eye-catching artwork, and a drawing specially tailored to not exclude anyone.

The two creatives proved to be a perfect pairing for the drop, with the Russian artist sculpting abstract 3D scenes for GRiZ to soundtrack with never before heard sonic stylings. Born from a collaborative art direction process, GRiZ fans will recognize the bold imagery and themes of inclusivity, self-love, peace and balance laced throughout Kitasavi’s immersive animations. Grant too has contributed his own piece of visual art to the collection, showcasing the abstract mixed media style that saw him sell out his own physical Denver gallery showing in 2019, and which has consumed his freetime for many years.

The offering consists of three open editions, four drawings, and a “1 of 1 X 3” auction consisting of three original 1 of 1’s to be sold to the single highest bidder. Anyone new to the NFT space will appreciate the $1 drawing which will be limited to 20 lucky winners, which GRiZ hopes will allow almost anyone to participate despite their means. Additionally GRiZ is pledging 100% of his proceeds for the open edition titled “Peace On Earth” to Carbon 180, a non profit who’s work educates, engages, and impacts policymakers, scientists, and businesses to champion and enact ambitious carbon removal policy.

Kitasavi, born Nikita Savinov, is a digital artist from Moscow, Russia. He received a traditional art education and holds a graphic design degree, and had been working as a designer for several years before transitioning to the world of digital art. Merging 3D art, photography, and sculpture, now Kitasavi creates his own abstract worlds where chaos is the only order. Organic shapes, whimsical characters, tangible textures, crazy colors, hidden easter eggs, humor, culinary and traveling references sit at the center of his artistic approach.

The drop comes after a series of 2021 releases and announcements for GRiZ including “Vibe Check”, “Ease Your Mind” with Ganja White Night, and “Bring Me Back” with Elohim. He also just sold out his largest and most ambitious headlining show to date, “Space Camp”, a two night adventure at Virginia’s iconic Hampton Coliseum (10,000+ Capacity) on December 17-18, 2021. The run will feature two unique sets from GRiZ himself alongside some of the most talented names in the bass community including Liquid Stranger, LSDream, CloZee, and Moore Kismet among many others.

“SEROTONIN BOOST” is a welcomed addition to the creative portfolio that has made GRiZ one of the most exciting and beloved artists in his world, always shaking things up and giving back where it matters the most.