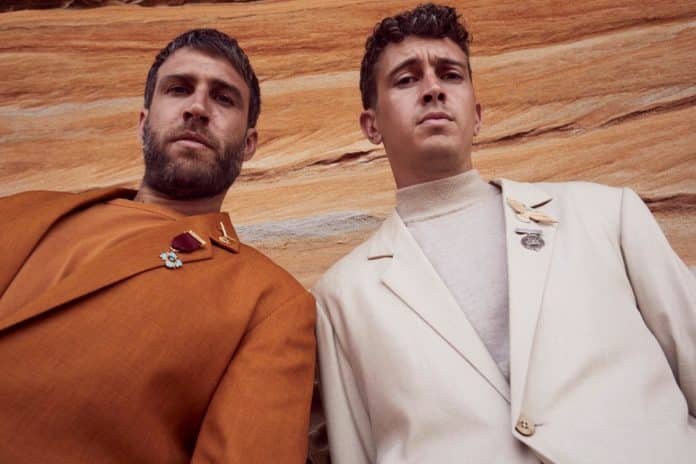 Released on Future Classic/Glassnote Records, ‘Lights Up’ marks the band’s first release of 2021 with a direct flight to Channel Tres’ own Compton California.

The track marks a highly anticipated return to North America for the duo as well, who will be gracing the stage for three nights at Downtown Los Angeles’ Banc of California stadium alongside electronic giants RÜFÜS DU SOL this November. 50,000 additional tickets were added to keep up with demand after the first show sold out in mere minutes.

‘Lights Up’ is the first track to be released in over a year from the live-electronic selectors, who have been working together for over a decade, creating timeless, genre-defying classics drenched in a sense of nostalgia. ‘Lights Up’ is a continuation of this philosophy, aided by Channel Tres’ propensity for crossing genres and drawing inspiration from eras like 90s Detroit house and West-Coast hip-hop. The result is a track that belongs to these moments in time as much as it represents what’s next for the global dance sound, a confluence of feeling and style.

Speaking about the track and their collaboration with Channel Tres, Flight Facilities’ Hugo Gruzman/Jimmy Lyell said — “We’ve always loved the sound of the early Detroit House scene that crossed over with the Paradise Garage era. Combined with our love for Channel’s voice, it seemed like a perfect fit. His voice has a magical ability to make songs that are made for strutting. We felt it was important to keep enough of our sound and influence in the track, to avoid it sounding too derivative, so we wanted to include some 90’s and 00’s elements to give the song its own character.”

While forthcoming performances at the Banc of California and New Zealand’s Snow Machine Festival point to exciting projects ahead, the guys have kept their productions flowing, most recently dropping a disco-forward remix of ‘Vintage‘ for New York bassist Blu DeTiger, delivering a brand new 1962-72 Decades mix, and launching their very own app – Flight Deck. The free IOS and Android compatible app, built to celebrate 10 years of Flight Facilities magic, is a one stop shop that houses a treasure trove of unreleased Flight Facilities tracks, bootleg cuts, mixtapes and more.

Initially gaining recognition in 2010 for singles like “Crave You” ft. Giselle Rosselli and “Foreign Language”, Flight Facilities has since been a constant industry driving force, which included releasing their debut and only full-length album to date Down to Earth in 2014. The LP went on to achieve gold certification and garner three ARIA nominations, with widespread appreciation for their feel-good, dance floor ready tunes. The band followed the album with a multi-year run of singles which included “Need You” ft. NÏKA, “Arty Boy” ft Emma Louise, “Stranded” ft. Broods, Reggie Watts, Broods & Saro, “All Your Love” ft Dustin Tebbutt, and “Better Than Ever” ft Aloe Blacc.

Channel Tres has been steadily continuing on his unstoppable trajectory, having most recently released his I Can’t Go Outside EP, an introspective mixtape which boasted a sexy blend of classic house and West Coast rap and featured collaborations with the likes of Tinashe and Tyler the Creator. He also featured on further major hits including “Impact” with SG Lewis and Robyn, and “Recap”, a collaboration alongside Kito and VanJess.

‘Lights Up’ is an eagerly awaited homecoming for Flight Facilities, who remain two of the most recognizable forces in the globally facing Australian electronic music scene that took hold in the early 2000s. As they prepare to once again position themselves center stage alongside budding superstars like Channel Tres, it is clear that the duo are ready to build upon the catchy and comforting sounds that remain at the core of the Flight Facilities journey.