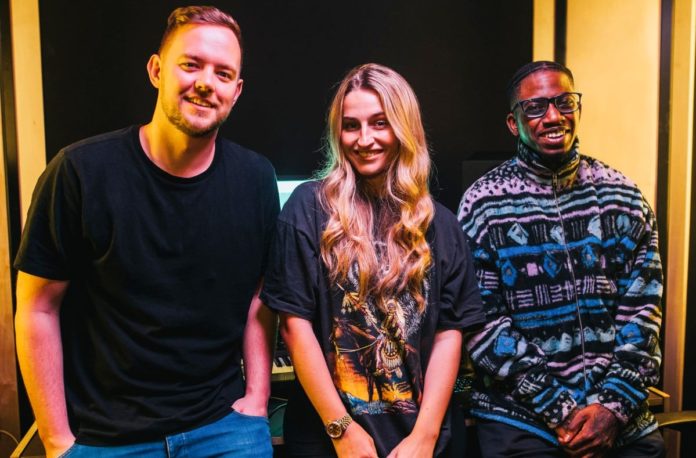 UK musical talents James Bluck, Blinkie and Taet have joined forces on new single ‘On Your Mind’, out 16th July.

An irresistibly sunkissed dose of dance-pop, ‘On Your Mind’ combines rousing piano chords, euphoric breakdowns and Taet’s soulful, pitch-perfect vocals to create a track brimming with feelgood energy. Not the first time they have crossed paths, it follows James’ 2017 remix of the Blinkie single ‘Halfway’.

“The thought process behind ‘On Your Mind’ was to initially create a track for summer, something you could listen to in the car on the radio, or even while chilling on the beach,” James explains. “When I was making it, the idea I had was driving down a long road with the roof down, the sun is shining and you’re with your friends having a good time. In the early days of ‘On Your Mind’, which wasn’t called that at the time, I sent the idea over to Blinkie and he really liked it so we started working on it together doing a collaboration. In that process we got Grace and Taet involved which worked on the songwriting and vocals.

Blinkie adds: “One of my good friends Grace Tither (who was on my single ‘Little Love’) sent me the initial demo vocal for this track and I knew that something sick could be made from it. James and I had been working together on some ideas remotely and one of the instrumentals he sent me just married up perfectly to the Grace Tither vocal. I had an idea of adding Taet to the track because I’ve always thought she had a great vocal and we were due to work on something together.”

James Bluck has spent over a decade performing at some of the world’s finest clubs and festivals, such as Ministry of Sound, XOYO and fabric. However he is best known for his stunning collection of remixes, including reworks of tracks from Disciples, Varski and Fleur East. His debut single ‘Leave (Get Out)’ feat. EMIAH entered the Viral 50 Australia chart at number #29 and is approaching 1 million streams on spotify.

With tens of millions of streams across his back catalogue and an array of radio support from the likes of Nick Grimshaw, Scott Mills, MistaJam, Reece Parkinson, Jordan North and DJ Target across BBC Radio 1 & 1Xtra, Blinkie has firmly established himself as a leading light of UK music, recently remixing a track from Craig David and KSI.

Not stopping there, Blinkie also executive produced the recent LP of one of Manchester’s biggest rap stars Bugzy Malone, titled The Resurrection.

Originally from Essex but now based in London, Taet fell in love with singing at a young age and simply hasn’t looked back. She has since racked up millions of streams across an array of lauded tracks, most prominently garnering 1.7 million Spotify streams on ‘What You Gonna Do’, a collaboration with CLIK3D.