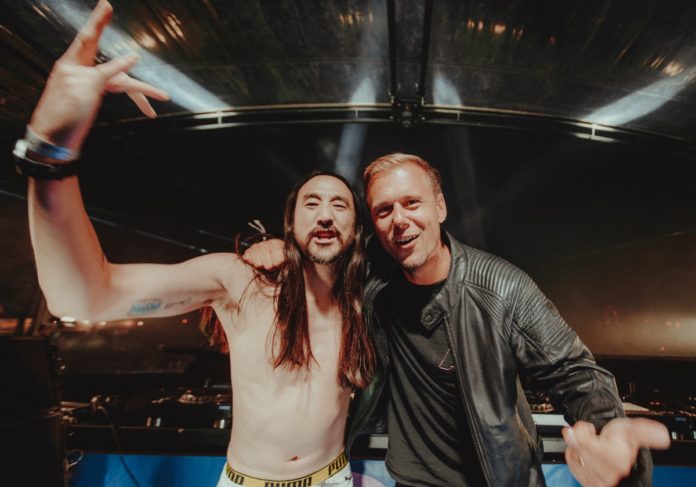 Following weeks of teasing the new song in their sets this summer, the pair surprised their fans at Austria’s Electric Love Festival by uniting on stage to perform ‘Music Means Love Forever’ live for the first time. The monumental moment is documented via a pair of music videos that arrive today alongside the single.

One video showcases the experience through Armin’s perspective, while the other video follows the festival journey from Aoki’s lens, each offering unique day-in-the-life points of view.

Fans can tune in to Steve Aoki’s YouTube channel today at 9AM Pacific / 6PM CEST to watch the music video premiere, followed by a YouTube afterparty, where Aoki and Armin will discuss the collaboration.

“After remixing each other’s tracks, Steve and I thought it’d be a great idea to join forces in the studio,” Armin van Buuren explains. “I am a great admirer of Steve and I’m loving our brand-new collab. The title is pretty self-explanatory; music is a universal language and a language of love to many people as well. I can’t wait for everyone to make memories to this track!”

“I’m so excited to share this new track Armin van Buuren and I collaborated on together”, Steve Aoki states. “It’s a song celebrating dance music and all of the emotions that come with experiencing it. We played it out live together at Electric Love Festival this summer in a true celebration of getting to dance together once again.”

To celebrate the release, Armin and Aoki will host special takeovers on SiriusXM’s BPM channel. Tomorrow (Saturday, September 18), fans can tune in to BPM to hear a full day of Steve Aoki’s Remix Radio, Aoki’s channel that features dance remixes of the top pop and dance hits as well as his own original tracks.

BPM will close out the weekend on Sunday, September 19 with an all-day broadcast of A State Of Armin, which features the best selections in new and upcoming trance and progressive dance music, as well as classics from both Armin van Buuren and his collaborators from over the past twenty years.