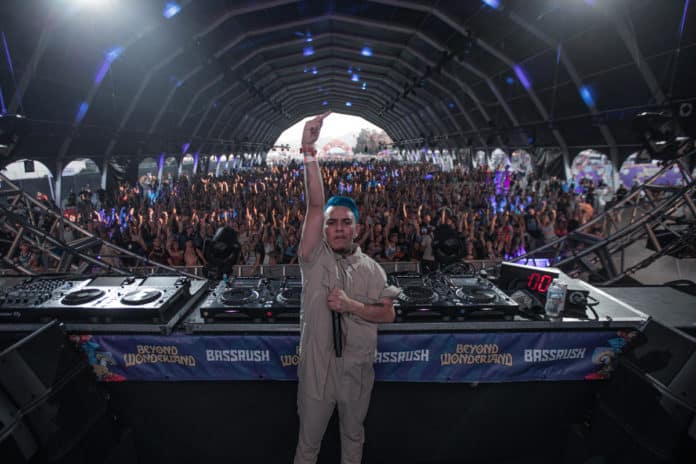 GAWM is kicking out the filth with his unholy ‘Desecrate’ EP, a heinous four-track offering serving as the next release on Bassrush Records.

Mobbing out from the streets of Los Angeles, the menacing producer has left the bass scene with no other option than to put some well-deserved respect on his name. Within the last couple of years, he’s cut through the noise with a sound that toes the line between trap and dubstep.

While he’s already broken into the circles of some of the most notorious labels in the game, his rock-solid connection to Bassrush is characterized by an impressive arc that points back to the explosive trajectory he’s currently enjoying.

Earlier this year, he caused a bit of panic with his debut on the label, “Fear,” a frighteningly feral chunk of low-end that found its way onto the fourth installment of the imprint’s ‘Prophecy’ compilation.

Suffice to say, his inclusion on the album was a safe bet because he quickly turned around and fulfilled the prediction with an elbow-throwing follow-up single. Teaming up with the boundary-pusher from Canadian, Matt Doe, their collab “POP DAT” flexed the rail-riding wonk in all the right places.

“Gawm is honestly one of my favorite producers when it comes to sound design, so I was really happy to jump on a project with him.,” says MATT DOE. “Overall, this track was meant to be something that sounded completely new all while merging our fat signature basses together, and I think we definitely succeeded!”

After two bulletproof outings on the label, GAWM is ready to reach the next level with his own full-fledged EP. Pairing both previous tracks alongside two new exclusives, his ‘Desecrate’ EP is a deviant matter only the weak-minded would dare walk away from. The title cut kicks things off proper, earning its name through a sinister mixture of ominous metal melodies and screwy bleep sequences forged from a place of utter unrighteousness.

On the opposite end of the package, the closing cut “Paranoid” sends things off on a high-strung note. A fog of apprehension cumulates around the dark, hazy synths until eventually descending into a shrilling metallic grind that is so demented it might require a few comforting words to bring you back down to earth.

“This is my favorite release to date,” says GAWM. “Bassrush has become like family to me and I’m so grateful for the opportunities they’ve sent my way. They’re a label that really goes above and beyond to help with the development for all the artists on their roster.”

Clocking in a total of four downright defiling bass cuts, GAWM’s ‘Desecrate’ EP is a disturbing display of dirty dubstep that’ll make the dancefloor want to dance itself clean.