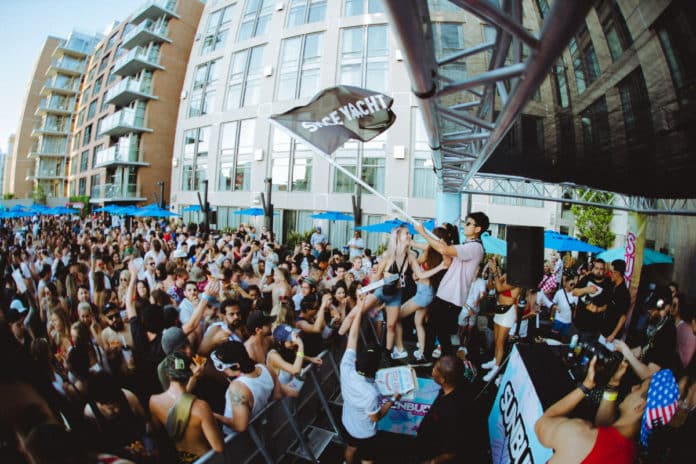 Following a series of tech-house, bass, and drum & bass compilations throughout 2021, Space Yacht is thrilled to present their debut techno compilation, ‘The Black Hole Vol. 1’ in collaboration with techno aficionado HELLBOUND!.

With a mission to revive the fundamental rave sounds that built today’s dance music scene, HELLBOUND! has quickly established himself as an outstanding force in the American techno community and beyond.

As the fourth Space Yacht compilation, these 10 tracks explore the vast spectrum of techno and old-school rave genres, ranging from minimal beats to fierce warehouse cuts. Featuring the underground sounds of North America’s most promising producers and DJs, ‘The Black Hole Vol. 1’ is a testament to the power and influence of today’s techno savants.

Space Yacht prides itself on being a collective that can’t be confined to one genre or sound, and they’ve long put on for techno acts both local and international through expertly-curated lineups at Sound Nightclub in Los Angeles — now, ‘The Black Hole Vol. 1’ brings the sounds of homegrown techno to listeners worldwide.

“We’re incredibly excited to put out our first hard techno compilation,” Space Yacht co-founder Henry Lu said. “We’ve been honored to organize some of the first events in the Western US for brands like mau5trap, the late i_o (rest in peace), and HELLBOUND! Now that we have our label division, being able to put out a whole cohesive compilation dedicated to this sound is a milestone for us.”

For The Black Hole compilation, Space Yacht sought out budding techno producers and influencers of the scene alike with the help of HELLBOUND! — as one of today’s most outspoken leaders of US techno, HELLBOUND! not only opens the compilation with his commanding track “Beware,” but he also took on the role of a key curator for the compilation. HELLBOUND! proves his mettle as a selector throughout The Black Hole Vol. 1: all 10 tracks represent the ferocious creativity and drive of techno’s new generation.

Space Yacht co-founder Henry Lu said his team found a handful of impressive demos from their own circles and from their Twitch music show Tune Reactor, but they felt compelled to call upon HELLBOUND! for his expert ears. “We’ve known HELLBOUND! since the inception of the project, and we’ve witnessed his growth as a producer and DJ,” Henry said.

“He has an immense drive and desire to be a key player in the American hard techno scene. We’ve had the pleasure of debuting the first HELLBOUND! West Coast US DJ performance, and now we have the honor of bringing him on for his Space Yacht Records debut in a big way.”

Check out the full tracklist below.