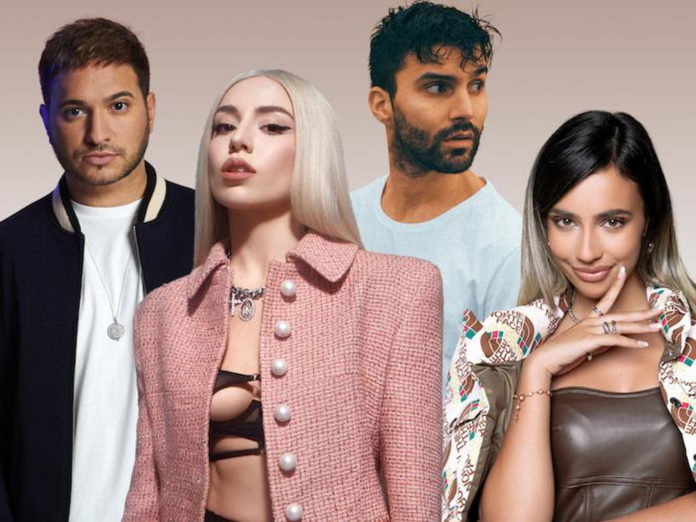 The original version of “Sad Boy,” shortly after its release last month, entered Billboard’s Hot Dance/Electronic Chart and clocked up 10M streams across all platforms. The new package of club-oriented interpretations of the dance-pop smash comes from the Dutch and British producers in the form of Club Remix and VIP Remix.

First up is the Club Remix, which rides on a bouncy and energetic bassline that serves as an upbeat rendition of the original. The VIP Remix takes it one step further with an underground driving beat and funky synths for a club-friendly, late-night vibe.

Like the original, these remixes showcase both R3HAB’s and Jonas Blue’s exceptional production skills. Stay tuned for the next cutting-edge releases from R3HAB, Jonas Blue, Ava Max, and Kylie Cantrall coming soon, and be on the lookout for R3HAB’s 3rd studio album dropping soon.

Dutch-Moroccan Multi-Platinum DJ and producer Fadil El Ghoul, better known as R3HAB, has been trailblazing his way through dance music for the better part of the last decade. From his breakthrough remixes for Rihanna, Drake, Taylor Swift, Calvin Harris, The Chainsmokers, Lady Gaga, to anthems such as Gold- and Platinum-certified “All Around The World (La La La)” and “Lullaby,” to his collaborations with the likes of Luis Fonsi, Sean Paul, ZAYN, Andy Grammer, Sofia Carson, Smokepurpp, Dimitri Vegas & Like Mike, Astrid S, Olivia Holt and more, R3HAB has proven to be one of the most talented and forward-thinking artists in the game, whose work collected over 5B streams to date.

In 2016 R3HAB founded his label CYB3RPVNK, which has passed 2B streams across all platforms since its inception. R3HAB himself continues to evolve and diversify his sound by working with a variety of artists around the globe, pushing the boundaries of dance music as he collaborates across genres and languages. In 2020 alone R3HAB celebrated over 900M Spotify streams.

He is currently the most discovered artist on Spotify, one of Spotify’s top 150 most streamed artists across all genres worldwide, and ranked #13 on prestigious DJ Mag’s Top 100 DJs chart. With his combination of innate artistry and innovative attitude, in 2021 R3HAB is continuing his journey among electronic music’s elite.

Jonas Blue’s career has been felt the world over with singles like “Fast Car,” “Perfect Strangers,” “Rise,” “Mama,” and “Polaroid” collectively amassing almost 3,5B streams on Spotify alone and having been certified Platinum over 120 times around the globe. With over 13B global streams, Jonas has cemented his name as the main stage DJ and pop powerhouse. 2018 was a landmark year.

He released “Rise” featuring Jack & Jack, which was one of the summer’s biggest global hits, and owned the autumn with “Polaroid” – his highly-anticipated collab with Liam Payne and Lennon Stella. The success of both hits was sandwiched between “Back & Forth” with Becky Hill and Detroit house legend MK. Debut album “Blue” soon followed, the recipient of the Brit Certified Breakthrough Award and later gold status.

Jonas has made his mark on Ibiza, having performed at hotspots Ushuaïa, Cafe Mambo, and has successfully hosted his Electronic Nature residency at superclub Hï Ibiza. Following on from hits “Mistakes” and “Naked” in 2020, “Something Stupid” featuring AWA and “Hear Me Say” featuring LEON kicked off his 2021 in style, smashing their way into homes worldwide as Jonas continues to inspire, uplift and spread his message of global positivity. As we see a return to live performances in 2021, Jonas joins the likes of Tiësto and Zedd as a resident DJ at Zouk in Las Vegas.

Ava Max is nothing short of a global sensation with massive hits such as “Sweet But Psycho,” “Kings & Queens,” “Salt,” “So Am I,” and “My Head & My Heart” contributing to over 100 Diamond, Platinum and Gold certifications globally!

The pop star’s debut album “Heaven & Hell” achieved its RIAA Gold Certification upon release as well as numerous other certifications around the world. Crafting pop anthems with a much-needed dose of fiery female empowerment, the singer has amassed over 9,5B streams and 4B video views to date.

The daughter of Albanian immigrants channels the imaginations and aesthetics of forebears like Mariah Carey and Gwen Stefani. Ava Max is a unique talent, blessed with a seismic voice, an individualistic high fashion mindset, and an undeniable knack for cinematic, theatrical popcraft.

Kylie Cantrall is a 16-year-old American singer, dancer, and actress. She is currently most known for playing Gabby Duran in the Disney Channel television series “Gabby Duran & The Unsittables.”

Thanks to her collaboration with stars like Zendaya and releasing music videos through Disney Channel Voices, including “Feeling Some Kinda Way,” which amassed over 15M views, Cantrall went on to become one of the youngest artists to achieve fame across the United States. With nearly 5M TikTok followers and over 500K Instagram followers, Kylie is poised to make her post-Disney artist debut with the single “Sad Boy.”