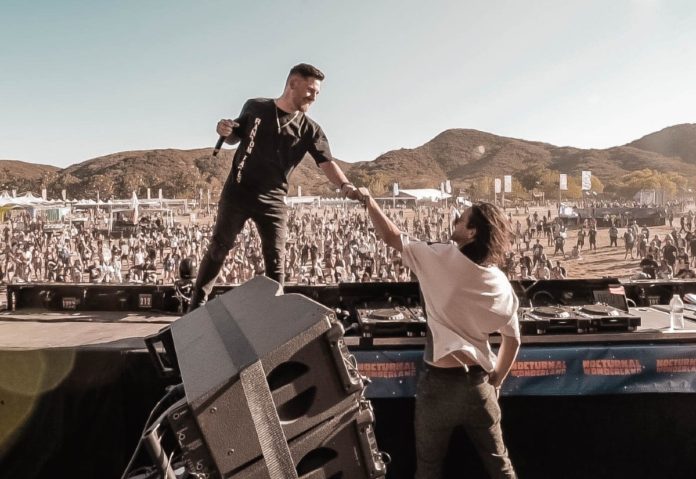 Highlnd and esteemed singer-songwriter Zack Gray band together for their latest single “Pseudo Love,” arriving as their sophomore appearance on Lost In Dreams Records.

Earlier in the year, the L.A-based producer Highlnd fell into perfect synchrony with the radiant vocal phenom Zack Gray on “If You Want to Stay.” Striking an emotional nerve all the way down to the root, the melancholic melodic bass anthem melded together their extraordinary talents to examine the tricky territory of compromise.

Picking up the pieces of a fragmented friendship splintered by stubbornness, the collaborative effort was a pristine label debut whose theme of reciprocity is now bleeding into their follow-up release.

“Pseudo Love” reflects on the shortcomings of a superficial relationship, with each selfish act finally coming to light at face value. Gray calls out the exploitative nature of the thorned love interest by detailing those bitter realizations with his vehement vocal tones.

Highlnd adds weight to every word through his emphatic production, brilliantly underscoring the emotion beat by meticulous beat. A surging orchestral current erodes away at the facade, while a whirlwind of somber strings, arresting atmospherics, wistful keys, and sweeping synth progressions work in tandem to reveal the ugly aftermath of falling prey to narcissistic love.

“‘Pseudo Love’ is a song about a one-sided relationship where one person truly cares and the other person is simply using the other,” says Zack Gray. “‘Your loyal pseudo’ is a statement about realizing that the love was fake and there was no real substance there. We are both super stoked by the continued support of Lost In Dreams and are so grateful to be a part of the family!”

Debuting on the imprint back in April with the aforementioned release alongside Gray, Highlnd has maintained a healthy presence on the catalog from his subsequent remix of Crystal Skies and JT Roach’s “Crazy While We’re Young,” as well as his reluctantly superstitious collab “Knock on Wood” with Rival and vocalist Lousy.

Forging down the same fruitful path, he’s currently gearing up for his very own multi-track package that’s off to a strong start with his newest creation. “This is the first single from my first EP and I’m beyond excited to be releasing it on such a supportive label that aligns so well with my music and message,”
reveals Highlnd.

Following the buzz from his striking debut solo album ‘Imperfect Love,’ the Las Vegas resident Zack Gray has been making waves in the dance music space from a run of features that have stacked up within the last year.

In 2021 alone, he’s gathered millions of streams collectively spanning works such as the genre-blurring “Earn It” with Vanic and Fairlane, ARMNHMR iridescent “Everybody Feels,” the slow-burning “Hurt” with MitiS, and the emo-tinged “Hard Not To Let You Go” with Synymata on SLANDER’s Heaven Sent.

Based on what we’ve seen thus far, Highlnd and Zack Gray evidently know how to play into each other’s strengths and that symbiotic dynamic shines through on their new single. “Pseudo Love” is available everywhere via Lost In Dreams.