Tiësto Performs From Atop The Edge In NYC, The Highest Open Sky Deck In The Western Hemisphere 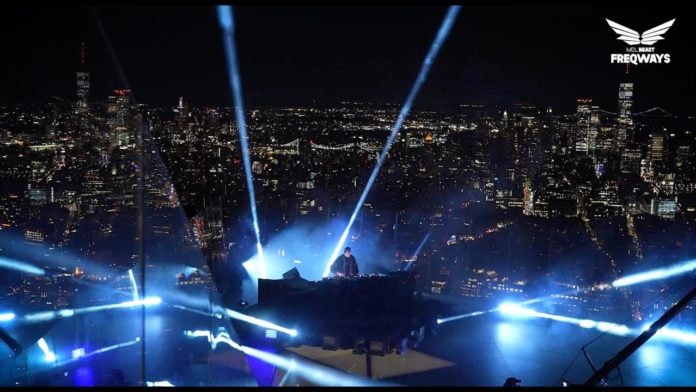 Standing at 1100-feet tall, on the 101st floor, The Edge is the highest open sky observation deck in the Western Hemisphere, and it played host on a chilly NCY night to a special set by the legendary Tiësto.

Part of MDLBEAST’s Freqways series, the set was played to only virtual audiences globally with the iconic Empire State Building and the entire NYC skyline as his backdrop.

The concept of MDLBEAST’s Freqways came to life to showcase riveting performances online during the Covid-19 pandemic. Explaining the concept, “Freqways is a way to build on the MDLBEAST values of spreading joy through immersive experiences and connecting communities beyond borders through music, arts, and culture. With most everyone isolated, but connecting online – MDLBEAST saw an opportunity in expanding their offering to reach a wider global audience.”

Continuing the series, Tiësto performed an hour-long set from atop The Edge, the viewing balcony in NYC’s Hudson Yards.

While Tiësto isn’t the first to perform from this iconic location, some of the other performances streamed from up top here have included The Weeknd, Cardi B, and Justin Beiber who premiered his documentary ‘Our World’ from The Edge last fall.

Being optimistic of the future of festivals as they plan to resurface for 2022, Tiësto has already been announced as always on headlining duties for Ultra Music Festival in Miami and Ultra Europe, Ubbi Dubbi Festival in Texas, and Creamfields in the UK among many more.

We’d also like to take a moment to wish the legend a Very Happy Birthday as he celebrates his 53rd Birthday today!