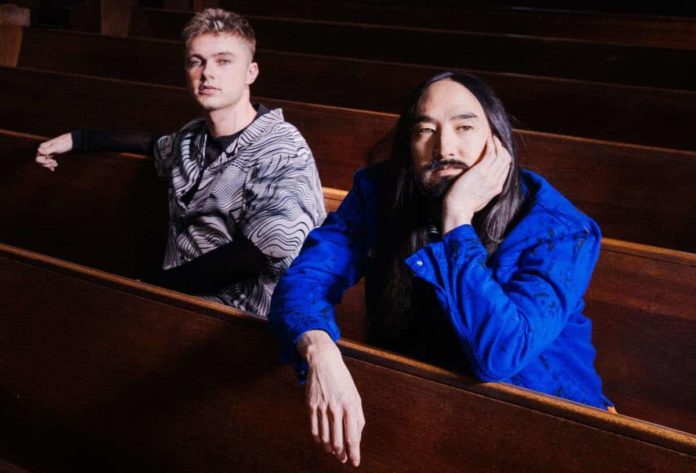 2x-Grammy-nominated artist and producer Steve Aoki and English singer-songwriter HRVY are finding liberation with their new collaborative single “Save Me” out today via Dim Mak Records.

The fizzy summer dance anthem is an electronic banger with a charming love story in the heart of the lyrics that will be taking over listeners worldwide. With earnest lyrics, cloaked in waves of catchy, energetic beats and head bopping production, the track blends Aoki’s unparalleled style with HRVY’s silky smooth vocals to produce a sonic experience that is absolutely undeniable. “Save Me” debuts alongside an eerily atmospheric music video that finds the two artists in a hauntingly dire situation.

Steve shares, “For ‘Save Me,’ I wanted to create a vibrant and fun drop that had a special bounce to match HRVY’s incredible vocal style. When we did the video, it felt like a haunted church vibe was the perfect setting for what the soul-stirring lyrics depict.”

HRVY and Aoki had been connecting through the air waves throughout the song’s production, finally getting a chance to meet in person for the first time at the music video shoot in Los Angeles.

“I’ve always been a huge fan of Steve’s,” says HRVY. “So after I wrote the song last year and heard he wanted it to be a single it was an immediate yes. We’d not actually met until the shoot in LA and I’m hoping we’ll be able to perform it together at some festivals in the summer and throw some cake out too!!”

This year has been a big one for HRVY, with HRVY’s millions of listeners following the 23-year-old on the adventure of this exciting next chapter in his musical maturation on the heels of his latest EP Views from the 23rd Floor.

Meanwhile Steve Aoki recently teamed up with grandson and Jasiah for the frenetic and guitar heavy “KULT,” as well as his gametime-ready smash with SHAQ “Welcome to the Playhouse.” In January the NFT visionary also launched A0K1VERSE, a new ecosystem bridging real-world experiences with web 2.0 and web3, continuing to pave a path towards the future as one of the top leading innovators in the NFT space.