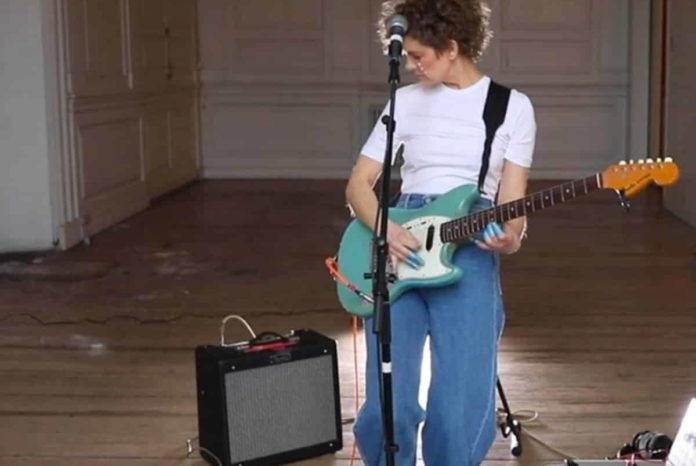 The former Blue Foundation lead singer Kirstine Stubbe Teglbjærg launched her new project ‘Sitrekin’ in 2021 with the debut single ‘Open Chest’, which went straight in A-rotation (and number 1) on the Danish National Radio Channel P6Beat and was endorsed by Dolby Laboratories to launch their new revolutionary Dolby Atmos Format at their press event in London.

Now, Sitrekin is set to release a unique, limited 12” vinyl with two tracks ‘Open Chest’ and her very own, remake of the multimillion-streamed Blue Foundation-classic ‘Eyes on Fire’, produced and performed entirely by herself.

Kirstine Stubbe Teglbjærg releases the vinyl to celebrate the 15th anniversary of ‘Eyes on Fire’ this year, and to mark the beginning of her new project – ‘Sitrekin’: “’Eyes on Fire’ was the very last song I released with Blue Foundation and ‘Open Chest’ is my very first release with Sitrekin and marks a new beginning. In this way, the vinyl closes a full circle – it connects the past and the future in my musical career”, Sitrekin explains and continues: “After I stepped out of Blue Foundation, Eyes on Fire went viral. With this re-make, I am somehow reclaiming the song. The lyrics of ‘Eyes on Fire’ has a violent tone, which must be understood metaphorically. The song is an ode to healthy female aggression and is inspired by ancient female power figures such as Medusa, Kali and Ereshkigal. It is about exploring and expressing one’s power and knowing one’s worth. To dare to stand for something. And it’s about timing, patience and perseverance. About not giving up, but instead keeping your eyes firmly on the goal, even though it may be far in the future”.

The vinyl will be pressed in 250 copies only, which will all be numbered and adorned with handwritten lyrics and Sitrekin’s logo etched directly into the B-side. The cover and inner sleeve is made of 100% recycled material and the vinyl itself is made of 25% recycled vinyl. It is the local Danish vinyl factory RPM Records, who is taking care of the production.

RPM was endorsed by the Swedish climate activist Greta Thunberg, who chose them for the production of her vinyl “I Am Greta” in 2021. The vinyl is released on May 6th on HUN SOLO Records.

The vinyl can be purchased exclusively from the record store Sound Station, Copenhagen.

The music video for ‘Eyes On Fire’, created by Tine Bek Hansen, was shot in the historical Court Theatre from 1767 in central Copenhagen. In the visual, Sitrekin is performing ‘Eyes on Fire Remake’ alone in the white, high ceiling foyer of the theatre, which at that moment had been emptied of all movables due to renovation. “It was the perfect location for this video.” She says.

“I felt I was performing in the middle of a blank white canvas, where all possibilities were open and I could paint brand new brush strokes. Everything is cut to the bone in this production; no superfluous decoration. Only me, in a plain white t-shirt in an empty room with my music and my lyrics. I have tears down my cheeks as they for me symbolize cleansing and surrender. An acceptance of the state of things and a ground zero from which one can heal and rise”, she adds.