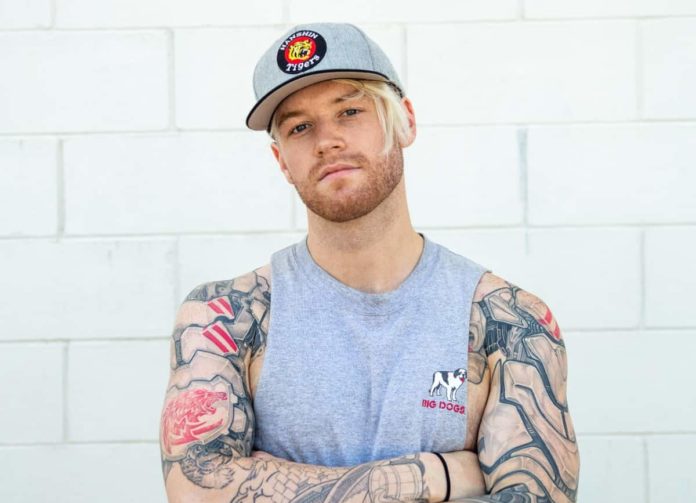 The musician’s latest features previously released lead singles from throughout the year, including ‘2018’, ‘The Worst Part About Me’, ‘Angry All The Time’, and ‘What’s Broken’, in addition to following up 2021’s acclaimed collaborative endeavor with 4s4ki, ‘gemstone’. Out now via Create Music Group, the much-anticipated LP is available to listen to across all streaming platforms.

Kicking things off, ‘Hopeless to Hopeful’ packs quite the sonic punch, perfectly setting the tone for the rest of the LP to follow. A filtered live drum performance provides an atmospheric touch for the first half of the track, and is quickly followed by a textured vocal cut courtesy of Puppet. Lyrically, a strong emphasis is placed here on optimism and hope, leaving the listener with a ready and eager ear for the remainder of the album.

‘Whirlwind Summer’ follows, and maintains the same infectious energy present in its predecessor. An enticing, blended cacophony of rock and electronic music ensues, paired perfectly alongside a hefty barrage of bass and drums. Emotionally-charged throughout its entirety, the track truly makes one feel as if they’re in a whirlwind of non-stop action; a true tour de force of sound.

Up next, ‘Angry All The Time’ effortlessly carries the same high octane ambiance whilst upping the ante tenfold. The tune begins with a subtle buildup, expertly crafting tension as it progresses until the pulsating bass takes front-and-center. Being aligned with one’s emotions and the feeling of being angry serves as a universal connector from start-to-finish. Screaming out the lyrics with a fervent passion, Puppet drives home the track’s message with ease.

‘2018’ begins with a heady tone, giving one’s mind room to wander aimlessly. Puppet’s rich vocal performance is introduced with his signature rock sensibilities, singing about the strained relationship he once had four years ago. Contemplatively pensive, it highlights the special intricacies of something that was once valuable, and the hardship that he still faces from it today.

‘The Worst Part About Me’ details in-full the strenuous nature of a past relationship, and how the other person involved simply takes what they need without a care for anyone else in the world. Filtered instrumentation characterizes the majority of the tune, and Puppet’s vocal flows, lending an impassioned aspect that flawlessly fleshes it out in all the best ways audibly possible.

‘Bending’ serves as the album’s next track, and pivots stylistically from the first half. Sprightly and fun, it possesses an upbeat rhythm and beat that is sure to get one on in their feet in absolutely no time. Glitchy, warbly soundscapes and an intoxicating rock flair round out the rest of the approximately two-and-a-half minute song.

Directly following, ‘I’m Dreaming’ marks the LP’s halfway point. Breaking up ‘New York Family’ into two different parts, it acts as a prime interlude that makes it feel as if one is in a dream-like state, lulling the listener into the rest of the album.

‘Say Less’ takes the reins next, changing up the vibe completely from the rest of the high octane album. Instead, the emotionally-charged ballad serves as a romantic track that showcases Puppet’s distinct versatility when creating music in the studio. A refreshing breather, ‘Say Less’ is a stellar standout.

The LP’s focus track, ‘The Things I’d Say’ features additional vocals from burgeoning California-based singer/songwriter Astrale, an impeccable blend of both musician’s unparalleled signature sounds. Replete with the best of both rock and electronic music’s qualities, the exhilarating collaboration is an excellent addition to both artists’ flourishing back-catalogs.

‘Tough Choices’ is next, boasting a plethora of slow and fast paces as it pivots between emotional and hard-hitting sonic settings. Overall, it sets the stage and precedent for the remainder of the album to follow with ease.

The penultimate tune, ‘Owe You Everything’, carries with it the same sentimentality present in ‘Tough Choices’. From beginning to end, the track features an electric guitar that serves as a prime accompaniment to Puppet’s vocal performance.

‘What’s Broken’ rounds out the ‘New York Family’ LP, and begins with a mellow energy that is built upon as each second passes. At its core, it harkens back to the first track’s optimism, with Puppet stating he “found it in me, always knew I had it in me”. A quintessential addition to Puppet’s discography, ‘What’s Broken’ ends the album on a high note.