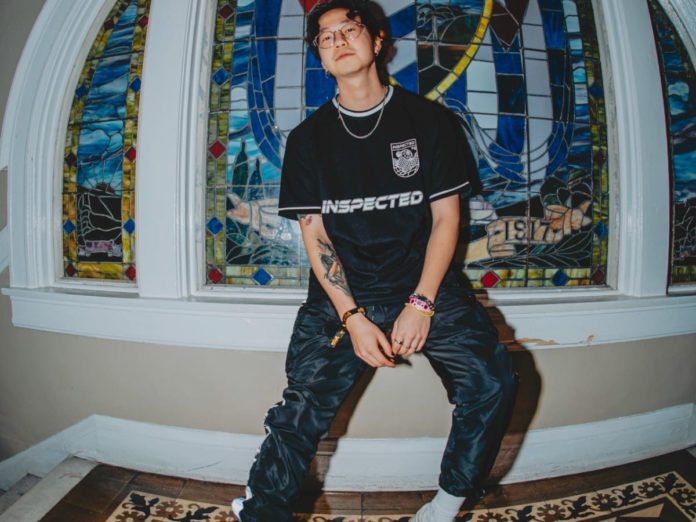 Saka walks down the path of the outcast on his new five-track ‘Anti-Hero’ EP, an immersive and imaginative bass music offering released on NGHTMRE and SLANDER’s Gud Vibrations imprint.

Originally from Hong Kong, the one they call Saka is an LA transplant who has formally taken his reign as an otherworldly storyteller, crafting brain-tickling beats that harness the power of bringing his masterfully constructed worlds to life.

Last year, he touched down on the Gud Vibrations imprint with a cracked combo arriving in the form of his double-sided single ‘Split Punch / Wing Chun,’ which drew inspiration from his lifelong love for martial arts. Saka is now giving the label the full treatment, with a multi-track and -genre creation that channels the complexities of the anti-hero.

“I wrote most of the ‘Anti-Hero’ EP over the course of my return to Hong Kong during the pandemic. The tracks explore my increased engagement/resonating with the anti-hero archetype as I’ve gotten older. I’ve taken inspiration from across the 140-172 realm (a place in bass music I find for interpretation of the world as so, Kafkaesque). Combining this sonic palette along with anti-hero archetypes from some of my favorite characters across different media led me to writing this. While not my first multi-genre EP, I feel as if this represents the first step in the evolution of my sound.”

The plotline starts to take shape at the most logical starting point: The title track. Brimming with suspense, it kicks off with a cinematic quality afforded to it by the use of clattering percussion set against choice narration samples depicting the image of an imperfect protagonist. Club kicks and side-chained vocal hits drive the movement along while industrial drum patterns change shape until a grungy half-time section envelopes the piece with its enriching distortion.

Moving into the next chapter, “Exia” enters the frame with a deceptively upbeat intro. Effervescent arpeggiations twinkle in the periphery, circling around while phaser synths and broken beats gradually come in to create sweet dissonance. The discordance soon dissipates in exchange for jazzy, acid warbles that become absorbed by a jungle-fueled drum & bass rhythm. Stacked up alongside sharp cymbal rides, echoing vocal Oh’s, and rumbling low-end, the heady melody chimes intermittently resurface only to come back with maximum strength at the end.

“Masamune” is sandwiched in the middle of the package, which took the honors of being the lead single announcing the EP back in March. On it, Saka leaned into his fascination with anime and weaponry to forge a freeform cut of the highest caliber. Sharpened with the intricacies of his left-field persuasions, this blade of deep dubstep rolls along a slow-burning, ever-evolving groove that only a master level beatsmith can pull off.

“I’ve always drawn inspiration from swords and ancient martial weapons in general, so for ‘Masamune’, I was inspired by Goro Nyudo Masamune, acclaimed to be Japan’s greatest swordsmith ever. According to legend, Masamune’s ‘holy swords’ would discriminate between good versus evil and would be the sharpest and strongest when used on the latter but would be unable to cut the former.”

Last month, “Shaolin” came in with a tornado kick as the second single to show itself from the EP. The action moved over onto the battlefield via this cavernous construction, starting out with tension-building gong samples and audio borrowed from an epic kung fu fight scene. Once fists started to fly, the experimental genius intercedes with a lethal combination of piercing synth squabbles, sword-clashing tones, robust bass plucks, and an air-bending funk seemingly handed down from a long lineage of wub-wielding monks.

For the finale, Saka enlists the help from emerging artist Aido, who leaves his mark on the only collaborative work showcased here. “Yin” takes its name to heart and embraces the stark contrast between its two halves. The first portion rises peacefully with bird chirps and calming atmospherics slowly giving way to darkness through foreboding synth crashes and militant drum rolls. Eventually, things are consumed by a cacophony of mechanical churns, shrieking strings, washed-out growls, and ominous pads. It undergoes a rebirth midway through and the cycle restarts through pulsating basslines and vaulting melody stabs. Once the light takes residence, a glitch-laden swing balances out the bad with its contemplative, awe-inspiring beauty.

“‘Yin” is about accepting the good with the bad; the ugly and the beautiful. Aido and I wrote this over the course of a late night until daybreak, and the song very much follows that timeline. It begins with a guttural, grotesque bassline and progresses into a heavily melodic soundscape and beat—the only way out of the shadows is by embracing it.”

Throughout time, anti-heroes have held the world captive with intrigue because unconventionality is something to be celebrated. And nothing sums up Saka more than his atypical approach to electronic music. His new ‘Anti-Hero’ EP is a testament to his ability to romanticize all that is unusual, and make music that pleases the mind just as much as it does the body.

Saka’s ‘Anti-Hero’ EP is available on all platforms via Gud Vibrations.