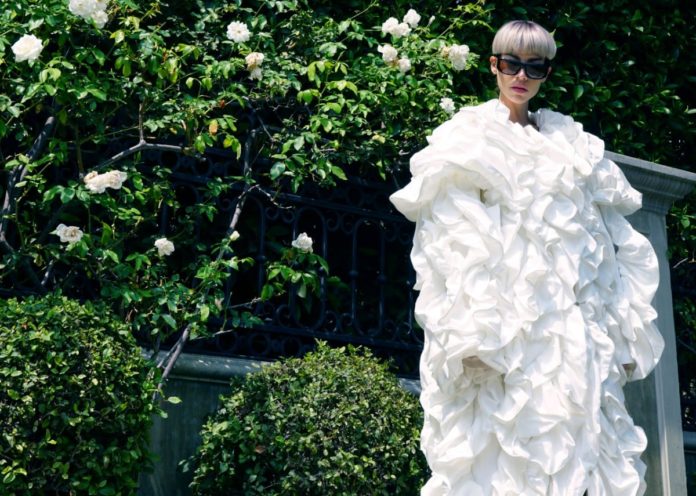 One of electronic music’s most contemporary voices, Eva Shaw, is back on the release radar with her highly-anticipated, 27-track debut album ‘SOLO’.

The opus marks the start of a new chapter in her artistic career and features 30 of the globe’s most established and rising lyrical stars from across the hip-hop scene. Unequivocally cool in its charm, and born from a host of musical references, Eva’s debut LP disrupts the confining notion of genres and sets her on a path to the upper echelon of music. Out now via Shaw’s own imprint Mad Fatti, ‘SOLO’ is available to listen to across all streaming platforms.

“SOLO” is an accumulation of everything I’ve learned so far, and it’s also the beginning of a new chapter. I am developing as an artist and I need to let this project out to be able to become what I envision. Audiences have wide-ranging personalities, tastes and moods, and so do I. I’m excited to show my fans, and hopefully new listeners something fresh, honest and new (and weird).” – Eva Shaw

Kicking things off, title track “SOLO” with Kris The $pirit starts the album on a high note, featuring a barrage of bass sounds and rolling percussion. With Eva Shaw and Kris The $pirit’s effortless flow and pulsating production elements permeating the track, the offering introduces listeners to Eva’s new sound palette whilst setting the tone for the full LP.

The debut album features a number of previously released records such as the succeeding cuts, “EASTERISLAND”, featuring Pressa & THOUXANABANFAUNI, and “OUTSIDE” featuring Jazz Cartier & Kris the $pirit. Both singles are characterized by reverberating bass sounds and hypnotic soundscapes, which deliver an unyielding fire to listeners’ eardrums.

Interlude “INSIDE” continues the album’s forward-thinking spirit whilst embodying a more measured and reflective ethos. Serving as the album’s palette cleanser, the cut is a mesmeric delivery of pitch-bending, 80’s inspired synth work and catchy vocal chops.

Directly following is “CALABASAS” with BTK Villeion and “BUST DOWN” in collaboration with Fedd The God, Kris the $pirit, & Reeves Junya. Both cuts give a West Coast rap feel, tapping into a breezy undertone with rapid verse deliveries and jumpy basslines. “RAW” with Jaay Cee & G Milla plays next, softening the sonic sphere with tumbling flows and hi-hat-fueled accenting. With the added flare of its piano instrumentation ebbing and flowing across its almost 3-minute run-time, Eva unravels a hostile web of menacing soundscapes and sharp percussion.

Tapping BTK Villeion & G Milla to collaborate on “F IT, I MADE IT,” Shaw delivers a raw, ringing bass sound. Her whispery vocals, alongside BTK Villeion & G Milla’s fast paced flows, position the track as a great addition to the ‘SOLO’ album and further demonstrate her endless sources of creativity.

The offering manifests a propulsive nature, rife with expertly crafted sounds, jumpy hi-hats and manipulated snares. Moving onto “CONCEITED” with ILLLYMINIACHI & Kid Riz, we’re introduced to a soundscape of swirling keys and sonic intricacies. The hard-hitting endeavour is filled with charisma and clever interplays of vocals from the rappers, which is no doubt bolstered by Shaw’s rhythmic-savvy arrangement.

“WOKE B” featuring Young Rose, Kris the $pirit, & Kid Riz is next, starting off with fluttering instrumentation that is immediately followed by a low-vibrating bass drop. The track pivots towards the end with a masterful beat switch up that delivers rolling bass and drum sounds.

The succeeding “TOWNHOUSES” with Clairmont The Second serves as another rousing addition to the ‘SOLO’ album. Clairmont The Second’s bold lyricism and effortless flow permeate the tune alongside the reverberating production elements, but it’s Shaw’s unique percussive formation that makes this track wholly addictive and undeniably cool.

Continuing her display of versatility and strong signature artistry, Shaw’s “DIAMONDS”, with THOUXANABANFAUNI & CHXPO, “DRACULA” with So Loki & Booka Banks, and “ROCKSTAR WASTED” with Swagger Rite go into an uncompromising domain, delivering a palpably raw energy from start to finish. With collaborators weaving in and out of each other’s territory and unyielding high energy bass drops, these tracks serve as stand out displays of Shaw’s potent, heady production capabilities. Her use of distorted 808s on these records challenges the habitual production techniques used by most rap-music producers and instead, manifests a unique hybrid of EDM and hip-hop that sets Eva’s sound in a league of its own.

“MEMES” with Danté Knows, DillanPonders, & Clev Eleven brings forth a pulsating beat with plucky timbres and erratic sonic detailing. Opting for a menacing tone, shaw creates a bedrock of ominous synth stabs, eerie soundscapes and a provocative bassline through which to amplify the sonority of its vocalists. The gritty “RAQX” with THOUXANABANFAUNI and BTK Villeion immediately takes listeners into a dark and brooding soundscape, putting a low and rumbling bass sound at the forefront of the production. The bouncy endeavour features stacked textures and rolling verses, displaying each rappers’ lyrical strengths.

Kid Riz returns once again for “GANG”, alongside BAINS. Following directly in the footsteps of such tracks as “WOKE B” AND “CONCEITED”, the offering pulls us into a dimension of hard-hitting percussion, purring bass beats and an undeniable groove throughout. On the flip, “40 BANDS”, featuring Bolsen & Kris The $pirit, gives us further insight into Eva’s alter-ego as a producer, serving us hair-raising synth intricacies and a fleshy bassline that’s drenched in distortion. Continuing the same vein of form as her preceding track “OUTSIDE”, Eva delivers an equally gritty cut with an acute focus on clean, tailored drum-work.

One of the most unique tracks on the album comes in the form of its closer, “PARANOID”; a dance-worthy crossbreed of pop and hip-hop conducive to summer fun and with plenty of intrigue and quirks. Playing upon the notion of finding the marriage in discord, Eva’s playful foundation of funk-tinged, bouncy production elements sits at a crossroads with DB Bantino, Lindasson and OD’s narrative of distrust, creating a record that is wholly versatile and open to interpretation.

At the conjunction of all 27-tracks is a cohesive synthesis of both intense and calm soundscapes that make up the ‘SOLO’ album. The LP showcases a harmonious blend of seemingly contrasting musical references, with each track boasting the flowing verses of its featured artists. The album places a strong emphasis on propelling the listener forward with Eva Shaw’s driving production tendencies, and satiates with a bevy of unrelenting bass. Marking the start of a brand new chapter in Shaw’s artistic career, ‘SOLO’ breaks the boundaries that once confined her, celebrating the harmony within disparity.