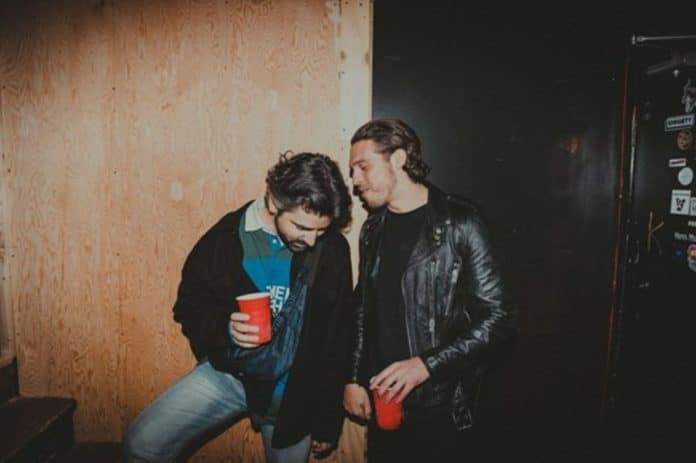 On the heels of their recent hau5trap release “Cardio,” Glass Petals & Drew Ray Tanner get physical in its brand new music video.

The “Cardio” music video releases on Wednesday, August 10 via hau5trap.

Peddling the motto “club music only,” Glass Petals is the side project of veteran producer Felix Cartal and Johnny Jover. Joining forces with Riverdale star Drew Ray Tanner, the trio put forth a driving bass house romp and is now unveiling its dance-floor-ready music video. Taking its signature vocal lick “I’m just doing cardio/on the dance floor,” Glass Petals & Tanner hit the treadmill on the town, quite literally doing cardio on the dance floor. The lighthearted music video follows Cartal, Jover, and Tanner through the club and outdoors as the trio train for the early morning after hours.

“People have been asking us ‘you’re DJs, do you have any good music for the gym?’ So we figured let’s just make the anthem,” explained Glass Petals’ Felix Cartal and Johnny Jover of their new single and subsequent music video.

“I love cardio, I love dance floors. So this was just a match made in heaven,” said Drew Ray Tanner on his collaboration with Glass Petals. “Felix and I had been working on a separate song recording the vocals, and he said to me before the session ended ‘hey, would you be down to say this one line into the mic?’ Which ended up being the lyrics to the song. And the rest is history. I think we did 2 takes, true story!”