What Is A Steel Tongue Drum And How Does It Sound? 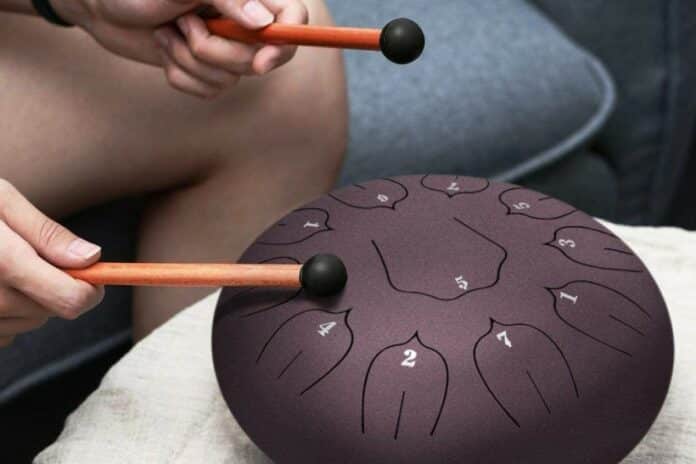 A steel hand drum is getting increasingly popular on records, in the streets, and even in your home.

At least, you may want to get one for yourself. You probably heard about how great an instrument is and how it helps you master music and meditate. So, what is a steel hand drum, and how does it sound? Hard to describe it with words, yet we’ll try.

How and When a Steel Tongue Drum Was Invented

It’s considered that the first steel tongue drum was made in 2007 by Dennis Havlena, an American Canadian inventor and musician. The first one was made out of a propane tank, hence one of its names — a tank drum. The name “steel tongue drum” describes it more precisely, while “hank drum” is a reference to one of its predecessors, namely Hang.

It is also a rather recent invention, a steel drum without tongues that was first made in Switzerland in 2000. It doesn’t have tongues, but it can still produce various notes, and the sound of both instruments has similarities, as they are both examples of a so-called idiopan class.

The idea of tongue drums predates this by centuries. It’s a refreshment of the concept developed independently in Africa, Indonesia, or Mesoamerica centuries ago. The tongue drum is much richer in tones and can be used to play melodic patterns – precisely what we see in its modern versions.

The Sound of a Steel Hand Drum

It sounds…spacey. That feeling comes from metal resonance, with gentle hit sound and long sustain. The duration of the sustain can be cut down manually if you touch the tongue as it still resonates, but that requires practice. If you touch the tongues one by one, the sound never ceases, making notes into the echoes, thus providing the depth that’s hard to expect from such a small thing.

It may differ in many ways. Different drums have different voices, depending on their material, size, and tuning. The manner of playing also matters. So, the sound is instantly recognizable; it’s also much more variable than it seems.

The Ways of Playing the Steel Tongue Drum

There are 2 basic ways of playing the steel tongue drum:

With mallets. This technique is similar to any other drum, except this instrument is tuned. So combining drum techniques with a melodic approach may provide a great unique feel.

With hands or fingers. With these, you can try more techniques, adjusting the force, how you touch it, and extra tricks like abruptly muting a note. It requires more training, but the precision it provides pays off with diversity you can master. In addition, it lets you play the instrument even if you have lost or broken your mallets.

How do these manners differ? The former is simpler and better suited for smaller drums. Mallets make the sound warmer and a bit louder. In addition, they are easier to master. It’s a great choice if you’re getting familiar with the instrument.

The latter has a lot of advantages. With your fingers, you can mute the note whenever you want it to cease. It’s a great feature given the long-sustain steel tongue drums are famous for. Another possibility is using more than 2 fingers to create chords or play faster.

While after a bit of practice, you can easily detect the difference in sound, both manners preserve the unique characteristics of the steel tongue drum. The mood it creates can be meditative and cheerful, which is what we love about this instrument.