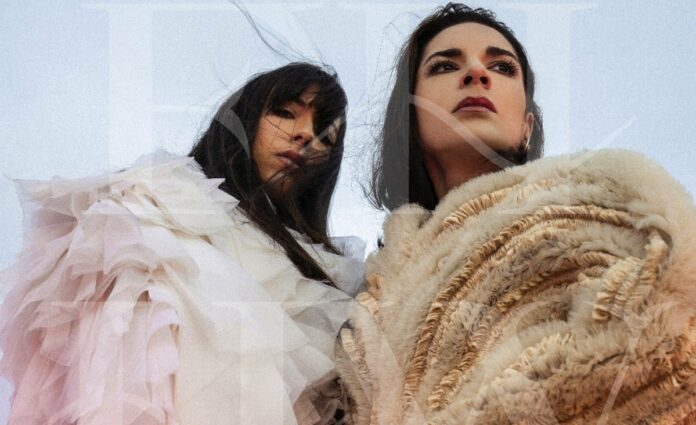 Hailing from Palermo, Italy, instrumentalists, singer/songwriters, DJs and label owners, Gioli and Assia create genreless sonics that are entirely their own. Their boundary-pushing video series #DiesisLive and recent singles “Fire, Hell And Holy Water”, “Silence”, “I’ll Be Fine”, “Playing Chess”, and “Eurydice”, have captured the hearts of their legions of fans worldwide.

Fire, Hell and Holy Water is the band’s biggest body of work to date, a 16-track labor of love. Named after a well known local Sicilian saying, the record documents their turbulent and intense highs and lows as a couple, and the health problems and untimely losses of relatives during the pandemic.

Referencing a plethora of major sonic influences, the pair cite London Grammar, Coldplay, Depeche Mode, Labyrinth’s Euphoria score, U2 and Ludovico Einaudi as just a few of the many formative inspirations on their landmark album.

A sense of passion and genuine enjoyment is conveyed across the entirety of Fire, Hell and Holy Water. Alongside Assia’s vocals, Giolì is always playing an instrument, whether it’s the piano, cello, drums, guitar, or handpan, on every song, giving the record a distinctively live sound. The album flows as a continuous mix due to their flawless blends, effortlessly coalescing elements of techno, indie, electro and pop into a sound that is uniquely Giolì & Assia.

The album’s lead track “Fire, Hell & Holy Water” reflects on the journey that Giolì & Assia have been on together overcoming a myriad of challenges, a metaphoric representation for the themes running throughout the album. “Playing Chess” is one of the most energetic singles on the album, led by Gioli’s uptempo drums and complemented by her captivating piano chords and Assia’s vocals. The push-pull effect of the instrumentation reflects on the contrastingly intense and introspective nature of the record.

Through enchanting melodies and imaginative lyricism, “Eurydice” details the tragic love story of mythological Greek characters Orpheus and Eurydice. The track is the pillar that gives life to the whole concept of the album, the escape from hell to the land of the living in the name of love. “I’ll Be Fine” highlights Giolì’s captivating piano chords and blends emotive soundscapes with Assia’s smooth and luxuriating vocals. The album’s focus track ‘Bittersweet Love’ is a proclamation of all the things they have made together, both as a couple and as artists, a beautiful ballad that rings true of their unending love for one another.

Having dealt with the notion of dance music being a boys only club, the new album signifies Gioli & Assia rising up against misogyny, something they’ve dealt with throughout their career. “As female writers and producers, we have accomplished everything entirely by ourselves.” For this reason, the pair believe it is “important that the album makes a statement, and that people know it’s our own.” What they have made, the pair agree, “is the best thing we’ve done so far – and we love it,” Giolì adds, saying that they want people to “have fun, dance, cry and scream” when listening to it.

Over the past 3 years, their sublime and ethereal soundscapes are brought to life in their boundary-pushing video series “#DiesisLive”. The videos have been a cornerstone of development and creative expression for Giolì & Assia as artists, carving out their own aesthetic niche and garnering the band millions of views for each production from across the globe.

Started in April 2019, the high-octane productions invite viewers to watch intimate Giolì & Assia live performances filmed in remote and jaw dropping locations. These have included a volcano in the Aeolian Islands, the Andromeda Theater in the Province of Agrigento, Isola Delle Femmine in the duo’s hometown of Palermo and the breathtaking Fjallsarlon Glacier Lagoon in Iceland, and most recently the Krysviksberg Cliffs in Iceland.

Giol & Assia will continue touring around the world into the Summer & Fall returning to North America in September with their biggest headline shows to date at LA’s The Novo and Brooklyn Steel. The duo also have slots at upcoming festivals including Las Vegas’s Life is Beautiful and San Francisco’s Portola.