Westend Teams Up With Role-Models, And Eluera For New Single, ‘Moderation (At Night)’ 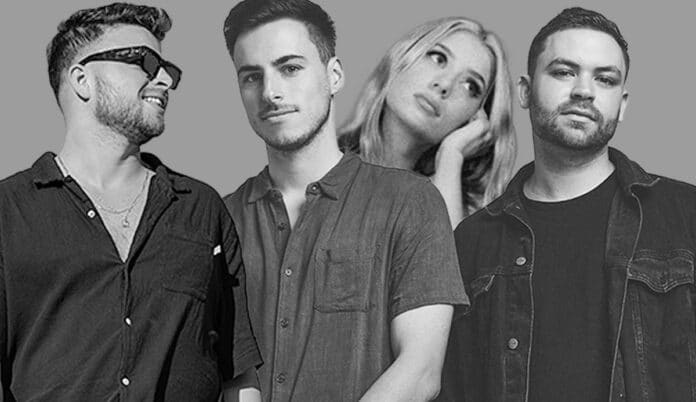 Westend, Role-Models, and Eluera unite on their new single “Moderation (At Night),” a remarkable melodic house creation slated for release on Insomniac Records.

When it comes to the world of dating, some people were born without a built-in braking system. The new single between NYC-based producer Westend, Australia’s newly formed duo Role-Models, and indie pop singer-songwriter Eluera finds itself standing in the shoes of someone who has zero self-control in the romance department.

Clocking in at a perceptive three-minute run, “Moderation (At Night)” balances a melodic house framework with a topline rooted in a make-or-break mentality. Eluera harps on her inability to stay inside the lines of her own love life, as her silky vocals outline her tendency to go all-in the moment she starts catching feelings.

A moody groove echoes her unchecked wallowing, feeding into Eluera’s recklessness with its brooding synth stabs, shuffling drums, slapping low-end, oscillating accents, and swirling textures that make the thought of staying grounded seem like a lost cause.

Westend shares his sentiments on being able to work with both artists: “Role-Models (formerly SODF) and I have been writing music together since the start of my career, so to release this single with them is a full circle moment. It’s one of my favorite records I have done because it pushed me out of my comfort zone. To get Elueras’ vocals and lyrics to work in a dance setting was a challenge but so rewarding. I really think she’s on her way to becoming a superstar as she is filled to the brim with talent. To collaborate with Australian artists is also very important to me, as I spent six months studying abroad there and the country heavily shaped my musical taste. Some of the best artists in dance and pop come from down under and it’s an honor to work with them.”

Tyler Morris is a New York City native that has been getting all the right looks as of late. As the brains behind the in-demand Westend moniker, the groove specialist’s stock continues to skyrocket after dominating the charts with career-catapulting tracks such as “Get This Party Started,” and two massive collabs alongside fellow New Yorker CID on “Let Me Take You” and “Jumpin.’”

All the while, he’s continually honed his craft with repeat appearances on the Insomniac Records catalog. He originally debuted on the label during the summer of 2020 with his four-track ‘Collide’ EP, and further established his presence through a remix of “New Dawn” and again on his Ranger Trucco-assisted “Life of Sin” single last year.

Role-Models may be a new name on the scene, but its two founding members have already solidified their status as staples in Sydney’s house music circuit. For the better part of the last decade, the production pair has been racking up support under the guise of SODF.

The Aussie duo has been championed by Triple J, BBC Radio 1, Sirius XM, and more, with a lengthy discography that has seen them cross paths with Westend on previous singles including “The Flavour,” “Out of My Head,” and a joint remix of Joel Corry’s “Sorry.”

Hailing from New South Wales, Eluera has quickly positioned herself to be one of the brightest pop talents emerging from the Central Coast. Leaning into her affinity for introspection and profound self-discovery, her work strikes the perfect balance of thoughts and emotions.

In 2019, she broke out with her combative, slow-burning song “Good When We Fight,” which found equal success with its acoustic-powered Alt Version. One year later, she followed up with the disco-flecked pop single “Moderation,” and it’s now taking on a new incarnation in the form of this stunning melodic house single.

The combination of Westend, Role-Models, and Eleura makes for an infectious crossover record whose only downfall is trying not to obsessively listen to it over and over.

Westend, Role-Model, and Eluera’s new single “Moderation (At Night)” is available on all platforms via Insomniac Records.