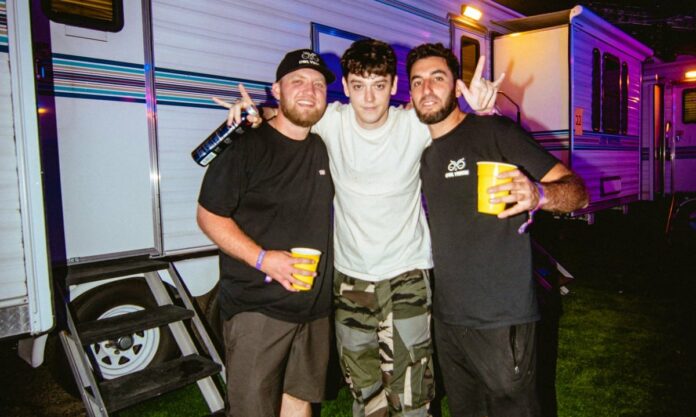 The genre-bending artist k?d offers up his latest single on HARD Recs with “THREE IN THE MORNING,” a late-night vocal number featuring singer-songwriter Cecilia Gault.

On the hindlegs of three sensational appearances on the HARD imprint, the electronic music dynamo k?d continues to test the limits of his artistic range with the next piece pulled from his forthcoming body of work.

“THREE IN THE MORNING” finds him linking up with Irish Japanese sensation Cecilia Gault on a steamy, subdued creation that is on the afterhours prowl. On it, she sings delicately but ever-intently about seizing the night with a sneaky link. Subtle breakbeat patterns and low-slung basslines create the prime backdrop for her suggestive advances.

Pounding pulse beats mimic the sensation of things heating up in the bedroom, as the track gradually swells into some hormone-racing action fueled by moody synths, palpitating vox accents, and lofty arpeggiations adding splashes of passion to the mix.

Shaped by the hustle and bustle of her home in Lower Manhattan, Cecilia Gault has found immense joy in experimenting with the melting pot of influences from her neighborhood; let alone the rich cultural traditions instilled in her from her own heritage.

She wears her bilingual upbringing like a badge of honor, flitting between English and Japanese on songs such as “Hanasuto” and “Nothing.” Gault has also been making waves in the dance scene with high profile features for Kaskade on “Love Me Like You Used To,” as well as on “Higher” alongside Audien.

It’s starting to become increasingly difficult to contain the anticipation surrounding k?d’s upcoming multi-track release. The Florida-based producer has been slowly drip-feeding its contents throughout the whole of 2022, starting out with the glitchy post-trap debut “RETURN TO NOTHINGNESS” back in February.

Less than a month later, he recruited the vocal talents of K-pop phenom June One Kim on the R&B-infused follow-up “FLOW IN YOU.” During the height of summer, he dropped the third offering “IF THIS IS A DREAM,” a crossover gem about a love so strong that it shatters one’s reality.

As the final track list for his upcoming project continues to take its form, k?d continues to prove that he is not the type to be painted into a corner. His latest single is a seductive slice of breakbeat, which harnesses the power to put the dancefloor in the mood no matter the time of day.

k?d’s new single “THREE IN THE MORNING,” featuring Cecilia Gault, is available on all platforms via HARD Recs.