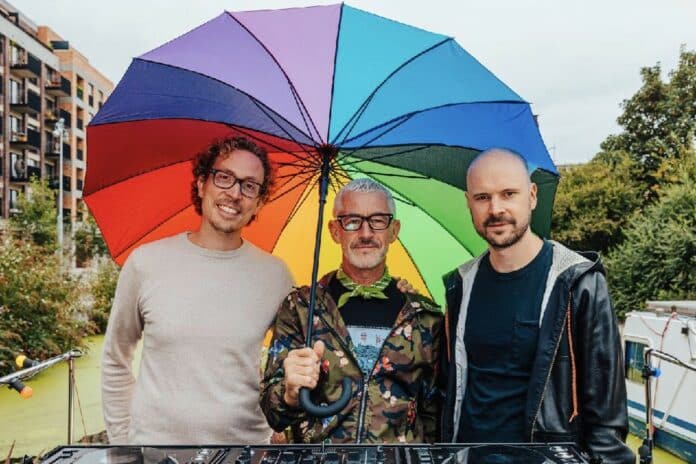 Above & Beyond kick off the second half of their ’10 Years of Group Therapy’ celebrations with one of Anjunabeats’ earliest signings, Maor Levi.

‘With Your Hope’ is longtime collaborator Richard Bedford’s vocal accompaniment to the classic instrumental ‘Hope’ from Above & Beyond’s ’Tri-State’ album. It was released on a bonus track version of the ‘Group Therapy’ album in 2011, exclusively on Amazon Music.

Now, the track sees its first worldwide release on all stores with Maor Levi’s remix, which debuted during Above & Beyond’s headline set at last year’s Group Therapy 450 festival at The Drumsheds London.

Maor has been a semi-regular contributor to Anjunabeats since 2006, and in that time he has helped to define the modern sound of the label. Maor first signed to Anjunadeep at 15 with ‘Lital’, before jumping across to Anjunabeats. He’s since produced a continuous stream of club hits for the label including classics like ‘Reflect’, ‘Shapes’, and ‘Won’t Say No’.

“I was asked to remix one of the tracks from Group Therapy for the album’s 10-year anniversary, and I wanted to choose a track that didn’t get much attention. For me, that was ‘With Your Hope’. Above & Beyond’s original version started as an instrumental, and then they added the Richard Bedford vocal which made it even better to me. So I decided that I had to be the first one to remix it!” – Maor Levi

Last year, GRAMMY-nominated dance trio Above & Beyond kicked off the 10th anniversary celebrations of their critically-acclaimed second studio album, ‘Group Therapy.’ To mark the occasion, an eclectic selection of acts took on the challenge of remixing ten iconic tracks from the 2011 album.

The first part of this cross-genre remix compilation included an energetic trance rework from ilan Bluestone, a breakbeat remix from Anjunadeep favorite CRi, and stunning house and techno reworks from Anjunafamily newcomers Kasablanca and Manila Killa.

Also included on the compilation were two fan-favorite remixes released in 2021 from Oliver Heldens and Spencer Brown, as well as melodic house selections from the likes of Braxton, Shai T, Khen, and Newman (I Love), all lifted from the Beatport #1 compilation, ’20 Years of Anjunabeats: The Deep Mixes’.

Next month, Above & Beyond are set to release part two of the ’10 Years of Group Therapy’ album, with an exciting tracklist of remixers to be announced soon.

The vinyl box set also includes a special ‘10 Years of Group Therapy’ slipmat and 12”x12” matte-finish prints of each single artwork. This box set is a limited, hand-numbered edition and is expected to ship in the autumn of 2022. Pre-orders are available now at the Anjuna Music Store. Every box set comes with a digital download of the original album and all remixes on the ‘10 Years of Group Therapy’ digital compilation.

Part two will be released on 13 October, with the full tracklist to be announced soon.

The first single from the album, Above & Beyond feat. Richard Bedford ‘With Your Hope’ (Maor Levi Remix), is out on now on Anjunabeats