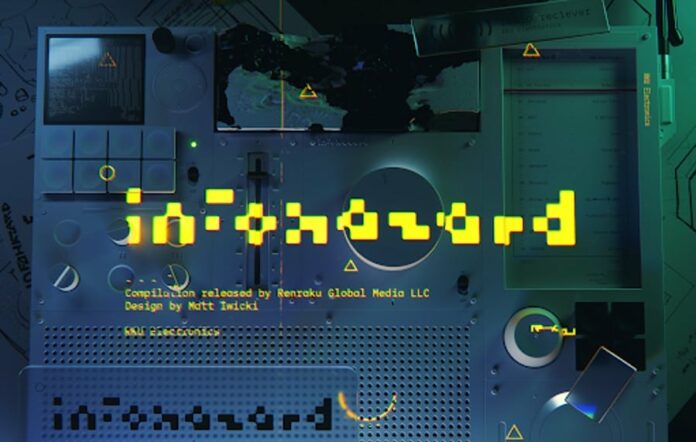 Out now, the compilation is chock-full of artists both familiar to the brand and those releasing with the collective for the first time.

“The idea of an infohazard has been discussed in certain circles of computer science and philosophy. To summarize briefly: an infohazard is a piece of information that can be damaging to the recipient (for instance: instructions on how to crash your computer hard drive). Running with that concept and applying it to music, the intent is to highlight and showcase music that fully realizes what is possible within electronic music – setting the bar higher in an already hyper-competitive landscape. Renraku has always strived to push the culture of electronic music forward, to break boundaries and to showcase what is possible at the absolute cutting edge; INFOHAZARD is our latest milestone in highlighting that.” -Renraku Global

Released on August 17 as the first glance into the collection, “STASIS DEMON” is a cinematic and glitchy track from UK-based experimental artist N². In addition to their brilliant hand at sound design and multiple single releases across the Renraku catalog, N² has contributed to releases such as Imprint for Charity, which aims to highlight the representation of LGBTQ voices both within and independent of the music industry.

Sabroi’s “Zoom” was released the following week, reminiscent of the sounds of experimental legends like G Jones and Shades. Sabroi’s Max for Live production tools, created in tandem with techno producer Hellbound!, have been featured on the likes of Magnetic Mag and more – and “Zoom” is the Swedish artist’s Renraku debut.

The dark and aggressively moody track “R_NICEGUYS” from HØST plans to drop on the last day of the month. With releases on Sherelle’s Hooversound, Unchained Recordings, Vision and tons of BBC Radio 1 plays under his belt, HØST sports an impressive ability to move fluidly between genres. V

hsceral’s “Mirror Test” will be the artist’s third occasion releasing with Renraku, his Living on Europa LP and Me Time EP being the precursors. With Spotify editorial support on Lofi Beats, Sunset Chill, Top Gaming Tracks, Lo-Fi Hits and more, the otherworldly sounds that Vhsceral brings to the table are unparalleled. Just three days before the full compilation drops, ALEPH’s “Paradigm” is set to release on Renraku.

Having already released on the Minneapolis imprint last year with his EGO DEATH LP, ALEPH’s eclectic sound continues to find support from tastemakers like Amon Tobin, Noisia and The Glitch Mob.

Since its formation in 2016, Renraku Global has been continually devoted to pushing next-generation sound and vision of the highest caliber. Beginning with a focus on experimental music from artists with little to no following, Renraku’s exponential growth in the scene has helped establish its familiarity to a dedicated audience looking for a fresh approach to artistic content.

A winning crossover of the niche and familiar is the underlying motif of Renraku’s catalog, consistently backed by numerous veteran names in the electronic community and played at a diverse array of live events around the world. INFOHAZARD will be no exception – the collective has high expectations for the upcoming project and fans will surely not be disappointed in its contents.

Stealing the attention of The Glitch Mob, Amon Tobin, Chris Cunningham, Flying Lotus, Daddy Kev and more early on, Renraku has maintained steady support from fans seeking more than just electronic music. Being founded by enthusiastic members of legendary online resources like Dogs on Acid and Neurohop Forum, Renraku is passionate about maintaining the community.

Renraku introduced chart-topping toolkits designed by a careful selection of incredibly prolific sound designers in tandem with its discography, striving to supply both music fans and creators alike. Wide distribution from Splice, ADSR, Prime Loops and others has ensured newcomers quick access to quality materials for elevating their own projects.

Making up the core of this creative output is a family of artists dedicated to a collective vision, and Renraku is committed to providing them a strong environment for artistic development and support.