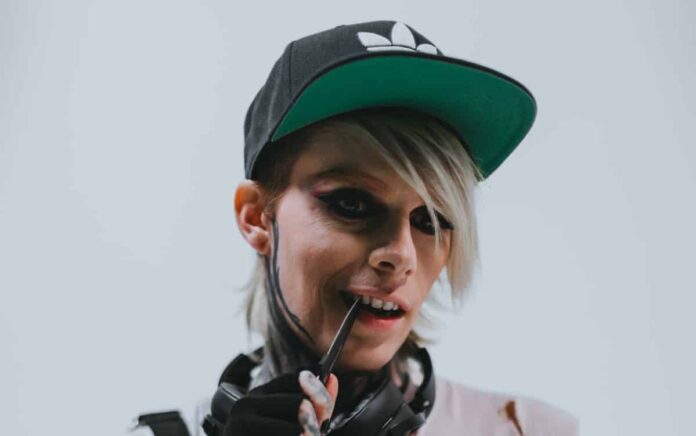 Following his anticipated appearance on Monstercat’s 10-Year Anniversary album, fan-favourite composer and producer Varien has returned to the label today, alongside Finnish producer Psylla for their A/B release, ‘FULL ASSAULT/ALL THAT U WANT’.

Featuring frenetic vocals from the likes of JACKIE EXTREME and girl_irl, the two-track package sees Varien and Psylla flex an aggressive approach to hyper-rave stylings in an homage to the darker side of ballroom. Fit for goth nights and cathartic club experiences, ‘FULL ASSAULT/ALL THAT U WANT’ is a refreshing look at the underbelly of queer music in its most raw form.

Varien shares, “I just want there to be more angry and aggressive queer music out there. There’s no way we’re all rainbow-colored. I went through my first real queer experiences in goth clubs, on industrial nights, with the elder gays – so I always clicked with that alternative side.”

Psylla adds, ”I’ve been looking more into ballroom culture and voguing during the past couple of years so when Nikki played me the demos for both songs I went: ’Yeah, we’re finishing these.’ It was awesome to get Jackie and girl_irl on them. They both immediately knew what we were going for: the grittier, more aggressive side of ballroom and LGBTQIA+ music.”

JACKIE EXTREME also comments, “Queerness is violence. Being told the person you genuinely are is incorrect on a daily basis puts you in a constant state of defense, a frame of mind that allows for no solace when you’re in a world of glaring eyes and frequent vile hate speech thrown casually your way. I’m so used to making songs that provide a shield, whereas this song is the sword, a barrage of frantic aggressive neon synths that I knew needed to be an absolute call to arms. I’m tired of seeing our people bruised and this is the theme song to throwing those bruises back.”

girl_irl concludes, “I’ve been wanting to slowly evolve my sound into something danceable, industrial and cathartic for club spaces for the past few months now – when I was approached to work on this song it felt like a perfect ‘right time and place’ moment. Psylla and Varien created a vision that immediately resonated with me and a sound that connects our worlds so well!! They’re visionaries who know exactly what they want. I love this track so much and I’m so stoked to be a part.”