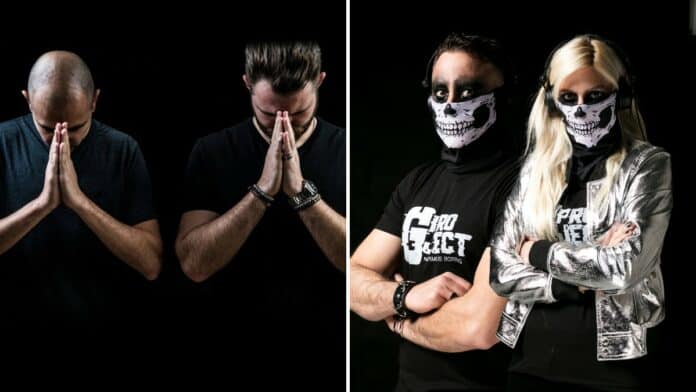 Teaming up for a collaboration like no other, power duos Alchimyst and Gproject have blessed us all with the release of ‘Euphoria.’

Released under MR.BLACK’s HYBIT label, and Hardwell’s Revealed Recordings, this is a production that will leave you in awe from start to finish.

Blessing us all with the most eclectic of sound(s), power duos Alchimyst and Gproject have joined forces for the release of ‘Euphoria.’ Taking this collaboration that one level further, MR.BLACK’s alias HYBIT features on this sensational production, as all set of artists implement their signature style(s) of play in a way that will have anyone begging for more. Electrifying from start to finish, this psy-trance masterpiece will take listeners on a musical journey like no other, whilst the undeniable musical chemistry between all sets of artists, helps elevate the track to a different dimension.

No strangers to frequent collaborations within the dance scene, Alchimyst have well and truly established a name for themselves as time progresses, and in turn, music heavyweights such as Armin van Buuren and Vini Vici have taken a liking towards this multifaceted duo, and everything that they have on offer.

Amassing millions of streams for hit tracks in the form of ‘Runes,’ ‘Rudra’ and ‘Move,’ it was only a matter of time until their reach within our community was further enhanced, and of course, we are most definitely all for it. Following suit, Israeli duo Gproject have been offering the most energetic of productions in a constant fashion, whilst their versatile nature has helped them stand out from all the rest. Incorporating an array of genres and styles in each of their releases, the skeleton masked duo have set their sights on global dominance, and if this latest track is anything to go by, we are more than certain that they will achieve just that.

Destined for the very top of the charts, ‘Euphoria’ is the epitome of a track that will have you feeling some type of way. Enticing from start to finish, each artist has left their own distinct touch.

Out now as a joint collaboration on both MR.BLACK’s HYBIT label, and Hardwell’s Revealed Recordings, ‘Euphoria’ is set to feature on the biggest stages worldwide, with pure chaos to be evoked whenever it is performed for a live audience, and not only.

With this in mind, be sure to check out this groundbreaking collaboration in all its glory below, with streaming also available through all major platforms here.