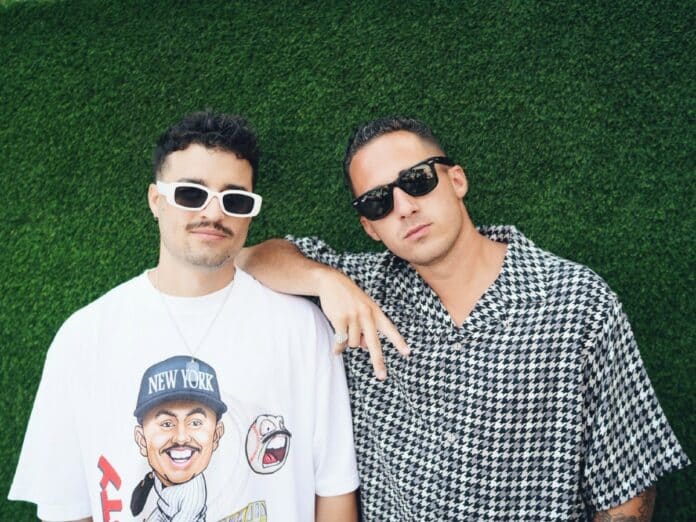 4B is back on HARD Recs with another track full of good vibes and plenty of beats, this time with a remake of “Knock On Wood” by Amii Stewart in collaboration with rising Miami-based star, producer Mikey Barreneche.

With all the elements of a proper dancefloor filler – from a dynamic bassline, catchy vocal riff as an ode to the known original, and trumpet instrumentals – their new release is simply born for the festival and club scene.

4B applies his production skills to make a fresh and fun version of “Knock On Wood” in the form of “LOUDER” that will vibe with both veteran fans of the original song and those who have never heard it before. 4B’s summer was pretty intense, from his own sold out “4B & Friends” event at LA’s Hollywood Palladium to remixes for Dillon Francis, Method Man, to his single with Shaq.

On the other hand, Mikey Barreneche has already been supported by the likes of Tiësto, Diplo, Timmy Trumpet, Wax Motif, Thomas Gold, AC Slater, and more.

“‘Knock On Wood’ by Amii Stewart is such a classic. I was so pumped when Mikey hit me with this idea. This one is super fun to play out live. I’ve played it at most of the festivals I was at this year, so excited to finally have it out on HARD Recs.” – 4B

“I’m excited to see how this generation responds to the track. A lot of younger people may have never even heard the original sample, so it will be a cool thing for them to later find the record ‘Knock On Wood’ and say, ‘oh, wow, that’s where they got that sound from.’ I’m happy to finally be releasing with Insomniac/HARD Recs. I have been sending demos for a couple of years, so to get a release is always something special.” – Mikey Barreneche

Robert McKeon Jr., better known as 4B, may only be 29 years old, but he’s already been honing his musical skills for nearly half of his life. The American DJ and producer has relentlessly pursued his signature sound and vision, garnering support from some of the industry’s legends like Skrillex, DJ Snake, Diplo and Tiësto for his unique sound and meticulous production style.

His trademark single was “Pop Dat” with Aazar in 2015; which became a quintessential trap anthem upon its release in 2015 and quickly evolved into a festival staple recognized all over the world. Since its release, it has become one of the most played trap songs in 2016, putting 4B firmly on the map as one to be watched in the dance music scene.

Since then, his talent for boundary-pushing production translated easily into a finely tuned ear for remixes, including one for Fetty Wap’s “My Way” with Flosstradamus and DJ Snake’s “Middle,” which was officially released through Interscope.

4B has also earned himself somewhat of a cult following from his electric live performances, which include his wildly popular set at EDC Las Vegas right before ZEDD, where he brought out Soulja Boy as a special guest. 4B continues to evolve and mature as an artist, and we are excited to see what the next wave of his career brings.

After finishing a career as a college athlete, he decided to dive straight into music. What he learned growing up as an athlete has so much to do with the way he approaches the music business. Bursting onto the scene in 2018 originally making hard dance, he has seemingly crossed over into almost every other genre in electronic music.

His work ethic in the studio and dedication to the craft of DJing is what sets him apart from the pack and is why he is one of the most respected artists coming out of Miami. He has had releases on Space Yacht, Bite This!, Terminal Underground, Hood Politics, Maca, and Autektone. The future is looking bright with some big label releases coming up in the new year.

Mikey’s goal is to give everyone an escape from reality. Ultimately he would love to be remembered as a great person and someone to model a career after.