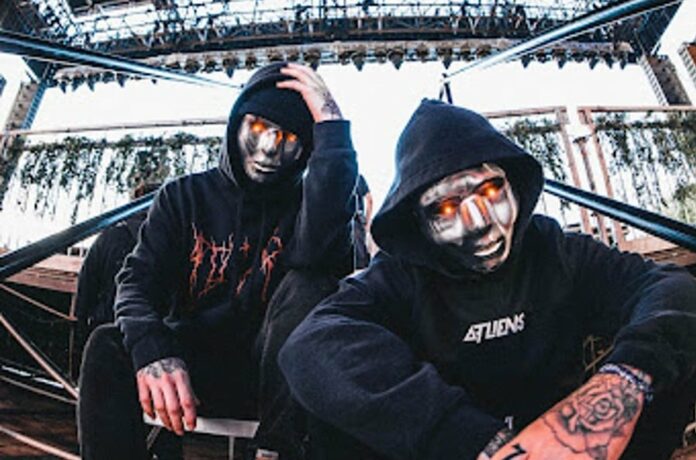 Just days before the first-annual Summoning Of The Eclipse Fest in Tennessee, ATLiens and SVDDEN DEATH prepare to release their first-ever collaboration, “Purgatory,” via Bassrush Records on October 18.

While ATLiens and SVDDEN DEATH have co-existed in the same circles for years, “Purgatory” will be their first-ever official collaboration, stoking the flames of dubstep fans worldwide.

“I never planned on this track being released, as it was a quick WIP the Aliens sent me during quarantine to work on right before my EDC set in 2020. Over two years after the track was played out during my EDC stream, fans seemed to still be tagging us in it and the hype continued to grow. So when the Aliens asked if they could release it a couple years later…I was hesitant at first, but after we worked on it some more and upgraded it a bit, I said, “F*** it, let’s do it’ – and I’m finally happy with the result and stoked for everyone to hear it.” – SVDDEN DEATH

Finding inspiration through legends within bass such as Noisia, 16BIT and Skrillex, SVDDEN DEATH has managed to formulate a hybrid of textured rhythms and sub-wrecking bass lines that are of his own maniacal sound. ATLiens, on the other hand, made their debut in dance music with the hit single “Chief” that garnered the attention of many after Skrillex debuted the record at Boiler Room – and was supported by the likes of RL Grime, Diplo and Jack Ü.

Both riding off of the high from Excision’s Lost Lands at the tail-end of September, ATLiens and SVDDEN DEATH are eager to get this track to the forefront of dubstep listeners. “Purgatory” has been a highly anticipated ID for months, having premiered on Youtube channels Dubstep Mansión, Unreleased Fire and more – in addition to several fan accounts.

The track has been unofficially circulating bass music circles for almost two years, garnering the support of reputable names and traction on social media channels like Twitter and Reddit.

The release falls just three days before SVDDEN DEATH’s first-annual Summoning Of The Eclipse Fest at The Caverns in Tennessee, featuring performances from dubstep legends like Eprom, Eptic b2b Space Laces and Marauda, among others.

Just under the three minute mark, the track features an obscurely ominous introduction leading into a prolonged build-up, almost a purgatory of its own for listeners. Slightly more experimental than past releases for both artists, the track is reminiscent of space travel or alien sound – sporting an astronaut on the track artwork, designed by BeSafe.

While SVDDEN DEATH normally releases independently through his own label, Svdden Death Recordings, this will be ATLiens’ second time releasing with Bassrush, following their secondary EP Ghost Planet.

Hailing from Atlanta, Georgia, ATLiens are most identifiable by their extraterrestrial existence and masked aura – a signature to their fans is their chrome faces and red-illuminated eyes, casting an eerie presence globally.

In 2017, ATLiens kicked off the year with their massive release of “Interlock,” which was released on Skrillex’s OWSLA. This was then followed by the single “Alchemy” and its notable remix pack by the likes of TYNAN, Jameston Thieves and MineSweepa. 2018 saw ATLiens release their massive Invasion EP featuring records like “’Malfunction,” “Witch Doctor” and “Interstellar” that lead to substantial coverage on SiriusXM/Diplo Revolution.

2019 saw yet another monumental EP – Ghost Planet – which featured significant bass artists such as EDDIE and Hairitage and launched their 2019 international tour, also titled Ghost Planet. On top of the slew of heavy-hitting releases, ATLiens has been on the road hitting festivals like Lost Lands, Moonrise, Freaky Deaky, EDC Orlando and innumerable venues internationally.

In a scene that is constantly changing, Bay Area native Danny Howland, better known as SVDDEN DEATH, has taken a spot at the forefront in this new age of dubstep. From releasing his first EP through the well-known Never Say Die: Black Label to now becoming one of the largest independent acts in dance music, his project continues to expand at unstoppable rates – making it clear that SVDDEN DEATH has made his mark within the scene, and will continue to level up while doing it.