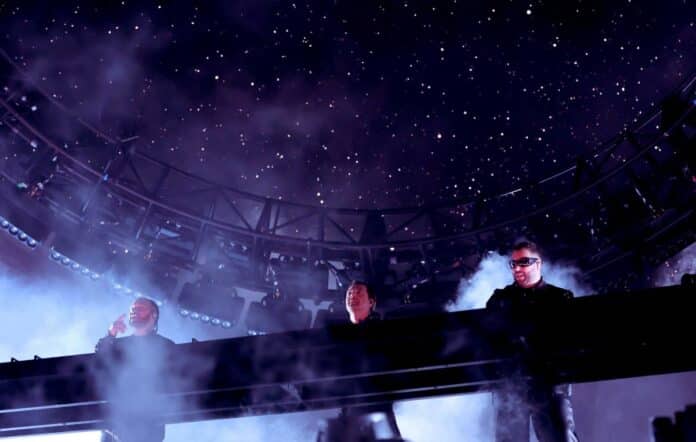 Swedish House Mafia has not had the best track record when it came to the ‘Paradise Again’ World Tour.

With a slew of shows that had begun getting canceled when the Tour had barely started, to now another five shows on the European leg being canceled due to ‘irreparable damage to an integral part of production.’

The shows that have been canceled include the stops in Zurich, Krakow, Prague, Cologne and Munich from today through October 27.

As per the Instagram story they shared the news in, during load out, a part of production which is integral to their performance was damaged. They continued to say, “Since the incident, we have looked at all solutions and unfortunately need to cancel all the upcoming shows until the gear can be replaced.”

They also confirmed all ticket holders from the 5 canceled shows will be refunded immediately and that they have been assured that the tour will continue as planned from October 29 with their show in Antwerp and then onwards. 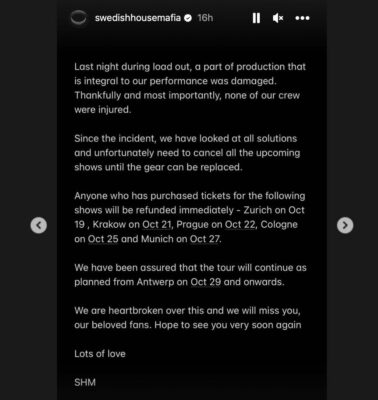 With only four dates now pending on this tour after the announcement of the cancellations, this has surely been a wild ride for the trio on their first comeback tour after all these years. The final four shows will see the trio head to Antwerp, Amsterdam, Copenhagen and then wrap up the tour in Oslo, Norway. Find all tour details here. (link – https://www.swedishhousemafia.com/start#tour )