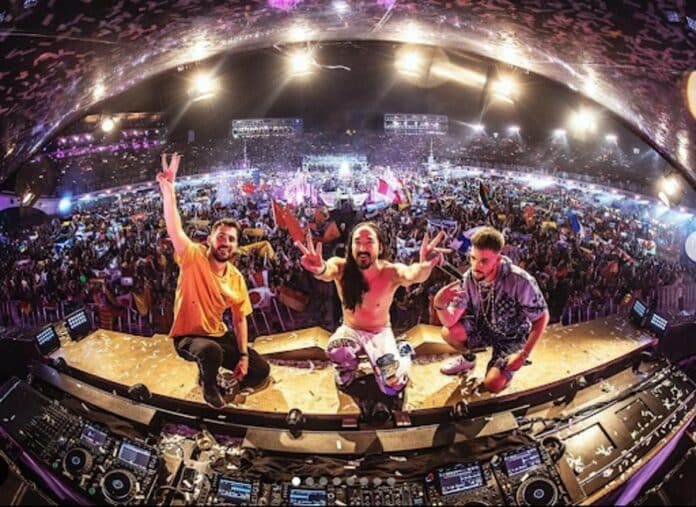 ‘Don’t you know pump it up, you’ve got to pump it up’ – one of the most iconic lyrics in recent house music history.

The tune, “Pump It Up,” was initially released in 2004 by Belgian producer Danzel and reached the top 10 in more than 10 countries, peaking at number 11 on the UK Singles Chart.

Now, the iconic trio, 3 Are Legend (comprised of superstars Dimitri Vegas & Like Mike and Steve Aoki) teams with Tujamo, Jaxx & Vega, and Black & White Brothers to deliver a fresh rendition of the beloved house track.

With layers of punchy drums and hard synths throughout the production, this crew has created the ultimate bouncing, big-room festival anthem. This 2022 version of “Pump It Up” comes right at you with a landslide of synths and a shuffle-ready melody that’s ready for peak time.

I’m so excited to have this collaboration come to life, three years in the making. The energy was electric when we dropped it at Tomorrowland 2022, looking into the crowd and seeing everyone waving their flags. I’m looking forward to playing it around the world in the years to come.” – Steve Aoki.

“We’re super happy to be releasing this one finally! This collaboration was about making a colossal festival anthem around one of the most iconic lines in dance music. Although it’s taken us three years to see this collab do its magic on the main stage at Tomorrowland, we’re happy the crowd loved it as much as us!” – Dimitri Vegas & Like Mike

“After my single collabs with Steve Aoki (Boneless) and Dimitri Vegas & Like Mike (Nova) it‘s an honor to have all 3 together on this massive collab which is made for big festivals.” – Tujamo

“Three years ago we had the idea to turn this classic into a modern club banger. Together with Tujamo & 3AreLegend, we found the perfect blend of our styles for this anthem.” – Jaxx & Vega