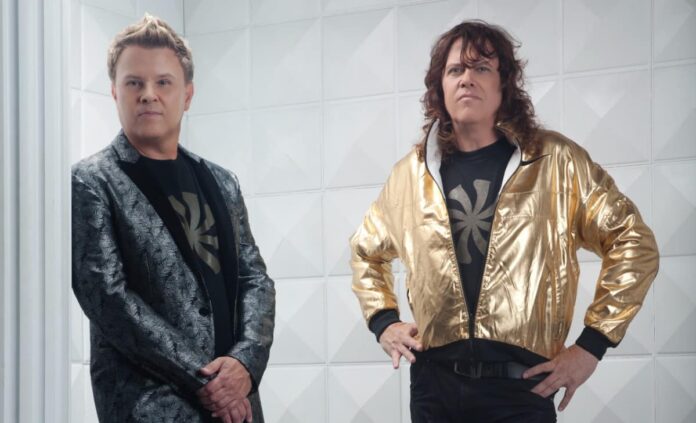 One of the most prolific and uncompromising artist projects around at the moment, LA Duo Juno and Spark, AKA Peppermint Heaven return with the emphatic new “Poptropolis” EP.

Working alongside legendary mixer/ producer Brian Reeves (Miley Cyrus / Elton John / U2 / Simple Minds), the enigmatic songwriting duo have created a project that’s beyond even their own retro-leaning musical desires.

The release marks an extensive run of consistency, including remix packages and regular album and EP releases. Across Spotify, the production and songwriting duo have smashed beyond the 13 million streams mark.

Their wide range of collaborations have also led to support from the likes of CLASH, Datatransmission, Magnetic Magazine and plenty more. The duo have recently found a fertile ground on TikTok with over 400k views on their tracks from unique user generated content

Filled with analogue synth bliss and pop sensibilities, the “Poptropolis EP” takes listeners on a journey through Juno & Spark’s creative mind. The first track “Find The Light Inside” sets the tone with rich drum grooves and intricate counter-melodies. Throughout the release we hear the duo explore their melancholic side on “Give It Away”, before “There’s a Star” showcases the band’s melodic, unique approach to vocal harmonies. The project finishes with “Paradise”, where the duo take their love for experimentation to a new level. Speaking on the new EP, the duo state:

“After moving in a more 70s rock direction with our last EP – Rocktropolis, we felt inspired to return to the 80s influenced synthpop sound our fans love so much. Poptropolis is a heavenly taste of what we do best.”