Dubdogz, Bruno Be, And GHOSTT Unite For Single ‘Sleepwalking’ Featuring The Chain Gang Of 1974 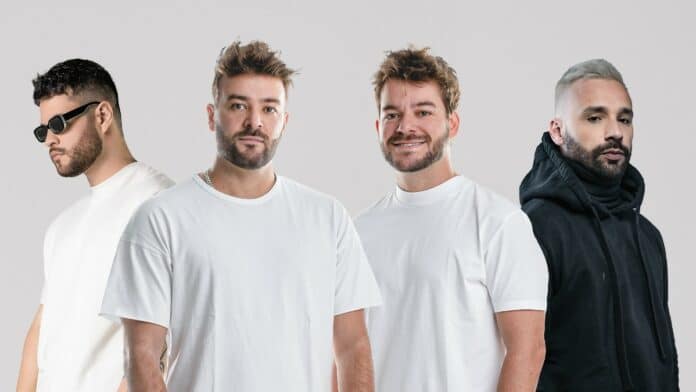 Releasing on labels such as RCA, Polydor, Ministry of Sound, Musical Freedom, Elektra, and Virgin Records and collaborating with high-profile names such as, Alok, Vintage Culture, Ofenbach, Yves V, and Laidback Luke the duo have built a reputation as dance hit machines.

The twin brothers are known for remixes of pop chart-toppers such as Belgian marvel Stromae’s hit Alors On Dance, which amassed over 96M Spotify streams and saw DJ support from the likes of Tiësto, Lucas & Steve, Showtek, Don Diablo in addition to original songs such as Free My Mind, and Techno Prank, which boast over 57M Spotify streams and 71M Spotify streams. Proud members of the DJ Mag’s Top 100 DJs, the duo have officially remixed for superstars such as David Guetta, Black Eyed Peas, Shakira, Becky Hill, P!NK, Nile Rodgers, Steve Angello, and many more.

Meanwhile, Bruno Be is known for significant remixes such as 2019’s infamous collaborative track Intro (Rework) with Vintage Culture, Ӧwnboss, and Ashibah, which currently sits at over 39M Spotify streams. The DJ and producer brings unforgettable energy to high-profile clubs such as Brazil’s Laroc and festivals like Rock in Rio and Só Track Boa.

With DJ support from the likes of ALOK, R3HAB, Vintage Culture, and KVSH and championed by major Spotify playlists such as mint Brasil and Dance Paradise, the DJ and producer has built a loyal following off the back of tracks such as Terrified, which boasts over 14M Spotify streams, and remix with Vintage Culture Human, which currently sits at over 46M Spotify streams.

Championed by infamous publications such as Billboard and international stars such as Tiësto, Alesso, Nicky Romero, and Afrojack, GHOSTT is a formidable force. He is known for high-profile remixes such as Sede Pra Te Ver with Vintage Culture, which amassed over 22M Spotify streams, and rework of Ed Sheeran’s classic hit Shape Of You, which reached over 7M Spotify streams.

With DJ support from Vintage Culture, Alok, Chemical Surf, and KVSH under his belt, GHOSTT has wowed crowds with acutely high-energy tracks at prominent Brazilian clubs such as Club Chalezinho and TETTO Club.

A contagious rework of LA-based synth-pop artist The Chain Gang of 1974’s contribution to the renowned 2013 Grand Theft Auto soundtrack, ‘Sleepwalking’ is an intensely emotional melodic house masterpiece perfect for the unique elation of sunrise or sunset. Effortlessly blending exciting pop euphoria with dreamy electronic progressions, Dubdogz, Bruno Be, and GHOSTT team up for a killer juggernaut oozing with viral potential.

DubDogz, Bruno Be, GHOSTT – ‘Sleepwalking’ (feat. The Chain Gang of 1974) is out 25th November via Spinnin’ Records.