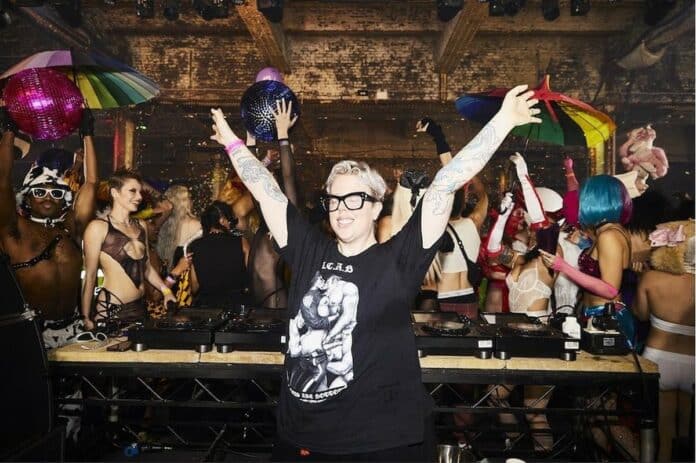 Her first solo release since 2017’s sumptuous disco house anthem “He Is The Voice I Hear”, it features a joyous contribution from vocalist Uffie and sees Stamper deliver exactly what she’s become known for: all-encompassing, celebratory, communal house music.

To celebrate the release of the new single, Stamper hosted a secret party at the infamous (and glorious) sweatbox venue ‘The Bunker’ in Deptford. Arming the partygoers with body-cams and a licence to do absolutely anything they wanted, she set out to capture the very essence of the unbridled freedom that lies at the heart of the track.

With the help of director Loose, the video frantically depicts the beautiful chaos of club culture in all its sweaty, sleazy, glitter-filled glory – a sentiment best described by the teenage Blessed Madonna who we meet as the video starts – reporting live from a burgeoning American rave scene still in embryonic form, completely unaware of the effect it will have on every aspect of her life.

“This is probably a bad way to go about promoting a record about raves, but I loathe party videos. I don’t think there’s anything more insulting to everything that’s good and true and beautiful about dance music than canned dj euphoria moments, choreographed—some jerk off spray tanned guy who pretended to make a record, who’s pretending to dj, hands-in-the-air rammed down the throats of the viewer. I didn’t even want to be in the video. I just wanted the ideas in the song to unfold naturally at a real, blood, sweat and tears on the floor party. So that’s what we did. We strapped body cams on people, who then proceeded to get absolutely pissed out of their minds. Uffie showed up with Vaseline and glitter smeared all over her chest and we got weird in a hole in the wall club till morning. I swept up when we we were done. What you see in the video is a more polite version of what happened. Also it’s is full of easter eggs and love letters for those who know. Happy hunting! To be honest, very few people probably precisely realized they were a part of a music video. They just knew they were feeling something they had missed. It can be like that. We don’t have to settle for less. And I’m still picking Uffie’s glitter out of my hair. Also it’s is full of easter eggs and love letters for those who know. Happy hunting!”

An overnight sensation two decades in the making, The Blessed Madonna is an artist whose career is woven into the fabric of dance music past, present and future.

Whether promoting illegal raves to 50 people in sweaty Kentucky basements as a teenager, headlining the biggest stages and festivals around the world, working alongside house legends like Frankie Knuckles or fearlessly taking on one of the most improbable, ambitious remix projects in recent times with Club Future Nostalgia (her collaborative album with pop icon Dua Lipa), The Blessed Madonna is synonymous with inclusive, unifying, cathartic dance music.

In recent years, The Blessed Madonna has channelled the emotions of millions as the vocalist on Fred again..’s lockdown anthem, “Marea (We Lost Dancing)”, become the voice of Saturday night radio, been immortalised as a GTA5 character and provided remixes for the likes of The Chemical Brothers, Florence & The Machine and, improbably, Elton John.

With “Serotonin Moonbeams” she is set to usher in a whole new era. A stop-you-in-your-tracks moment in its own right, it’s also the starting pistol for a run of new releases over the coming months; the first results from a year’s worth of blood, sweat, tears and joy in the studio for 50 hours a week with some of her best friends. There are even rumours of a debut album. Watch this space.