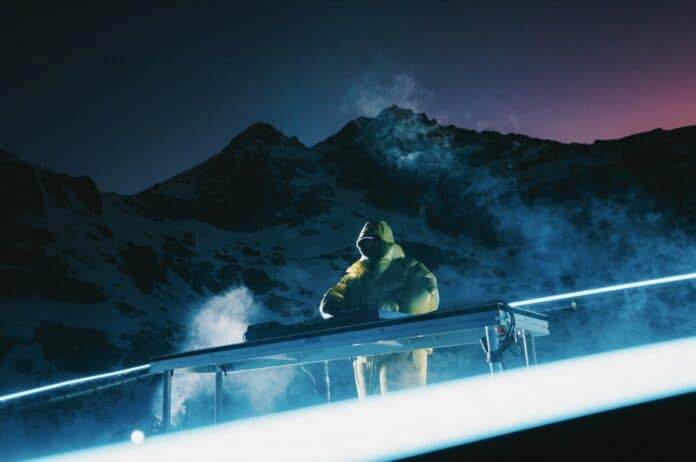 Ahead of his time in every sense, Montell2099 has been building otherworldly universes with his progressive, genre-bending electronic music since emerging on Soundcloud in 2015.

The same way he showcases New Zealand on the world stage through his music, the mesmerizing visual finds Montell2099 leaning proudly into his heritage, revealing more of the countries inimitable scenery, breathtaking views, and nature as his extravagant arena, from one of the most stunning and serene locations the world has to offer.

“The visual element of my music is super important,” says Montell. “And in a live setting the visuals are almost as important as the musical delivery. With my DJ sets I spend an incredible amount of time curating the journey – every drop has a purpose, and every breakdown moment is there for a reason. I always want to tell a story and take the audience on a musical journey and adding the visual element to this makes it more effective and helps immerse the audience into the world that we’ve created for them.”

He adds, “Whilst showcasing New Zealand’s beautiful landscape, I also wanted to play some unreleased tunes and touch on the music we enjoy down here at the bottom of the world.”

Live From Lake Alta finds Montell2099’s exhilarating electronic frequencies set against the chilling atmosphere of icy mountain ranges (that once set the scene of some epic moments in the legendary Lord of the Rings film series), golden hour sunset scenery sloping into brooding nightfall, and isolated snowfield surroundings, captured from a bird’s eye view.

“One of the biggest takeaways from our first shoot in Karekare was how the intense environment really leant itself to Montell’s music, so as his new music evolves into a heavier place, we wanted to find a location that was even more extreme, and a mountain in the middle winter felt like the perfect fit,” says Ben Dalgleish from Human Person, the creative team behind the production design and lighting design of the shoot.

Continuing to take his music and live show to even grander heights, Live From Lake Alta is another showcase of Montell2099’s art transcending conventionality and pushing the limits of the traditional live show experience.

A nod to Montell’s vision and creativity, the breathtaking video is being hosted on Trap Nation’s Youtube channel, a global hub for the best in electronic music – sporting over 30 million subscribers and counting.

The release of the video will coincide with a drop of limited edition t-shirts, from which all profits will go towards The Kea Conversation Trust, a charity supporting the native New Zealand bird that once populated The Remarkables region but is now nationally endangered.