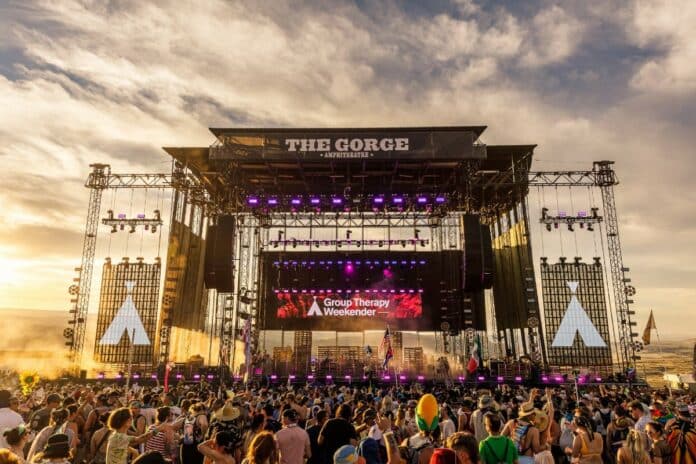 Announcing their return to The Gorge Amphitheatre for the Group Therapy Weekender, Above & Beyond announced they will be back there in the summer from July 21-23, 2023.

In addition to announcing the three day summer weekender, the trio announced that while this is usually a bi-annual affair, they have decided to bring forward the next gathering to 2023 and promise it will be the biggest Anjunafamily event of the year!

Our gathering at The Gorge is a bi-annual affair, but we’ve decided to bring the next one forward a year! This will be our biggest Anjunafamily event of 2023. Hope you can join us there.

Sign up to be the first to hear more: https://t.co/yHM3jWY5Go pic.twitter.com/qVRv3Xjm5h

While the trio will be there headlining the event, a bunch of artists from the Anjunabeats and Anjunadeep family will be joining them as well. In addition to the stellar lineup as expected, the Anjunafamily will also have access to wellness and learning programs, pop-ups and artist meet-and-greets.

In a follow-up tweet to the announcement, the trio also shared that they will be spending much of 2023 in the studio working on new music and hence they won’t be doing another big event up until ABGT600 in 2024. The tweet read, “For much of 2023 we’ll be locked away in the studio working on new music, which means we’ve decided not to do a major Group Therapy milestone show next year. ABGT600 in 2024 will be our next all-singing, all-dancing extravaganza, location to be announced.”

Earlier this year Above & Beyond released a two hour video of ABGT500 from earlier this year at the Banc of California Stadium in Los Angeles. Watch the celebration of 500 episodes of the iconic radio show and sign up to learn more about the Group Therapy Weekender ‘23 here.