Skrillex’s Credits As A Multifaceted Producer, Songwriter And Engineer Have Him Surpassing A Momentous 18 Billion Streams 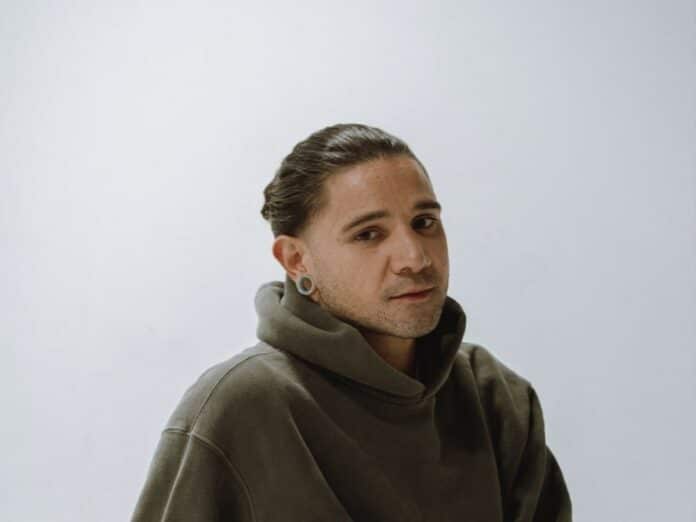 Skrillex aka Sonny Moore is as versatile and talented an artist as it gets, and has collaborations and productions credits galore to back that up.

In AI-generated data by Muso.ai has shed a light on the magnitude of this by revealing Skrillex’s various collaborative projects, releases, production credits, as well as songwriting credits, his lifetime streams, surpassing a mammoth 18 Billion streams!

The data that was exclusively provided to EDM.com by Muso.AI confirmed Skrillex’s joint streaming numbers were an astronomical 18.6 billion. In addition to producing music as Skrillex, Moore has been involved in engineering, mixing, recording, mastering and remastering, among other roles with the who’s who in the industry. Not to mention collaborative projects such as Dog Blood, Jack Ü and more adding to this reach!

It was also no surprise that Skrillex himself as an artist had lifetime streaming totals of over 12.5 billion after all his big name collaborations from Justin Beiber to Beyoncé and Rick Ross to J Balvin to name just a few. 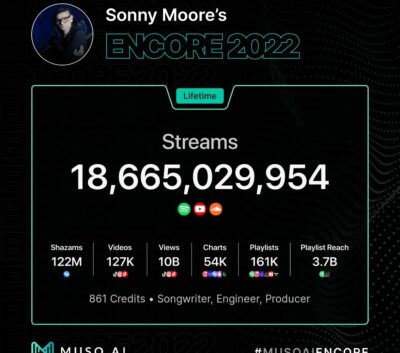 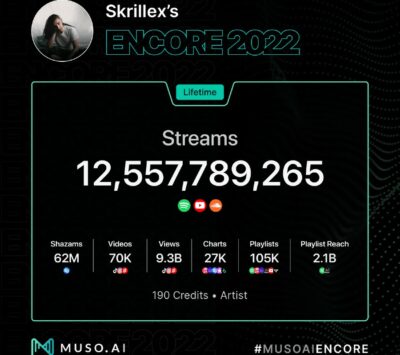 Muso.AI was founded in 2017 at NRG Recording Studios in Los Angeles after years of searching for a universal credit database that could keep up with the digitization of music.

As a part of the company’s ENCORE 2022 campaign, they are providing recording artists, rights-holders and music industry professionals similar insights on their lifetime streaming statistics.

They gather date from Spotify, TikTok, YouTube, SoundCloud, Apple Music as well as other major streaming platforms to showcase lifetime streams, collaborations, among other metrics. The new year-end event celebrates each Muso.AI Pro member by showcasing their lifetime career achievements in a short highlight reel and summary image ready to share with friends, fans, and colleagues.

In a statement, co-founder and CEO of Muso.AI Jay Baumgardner said, “We wanted to give every person in every industry role a fun way to be able to share their career achievements with all their friends, family, followers and colleagues.”