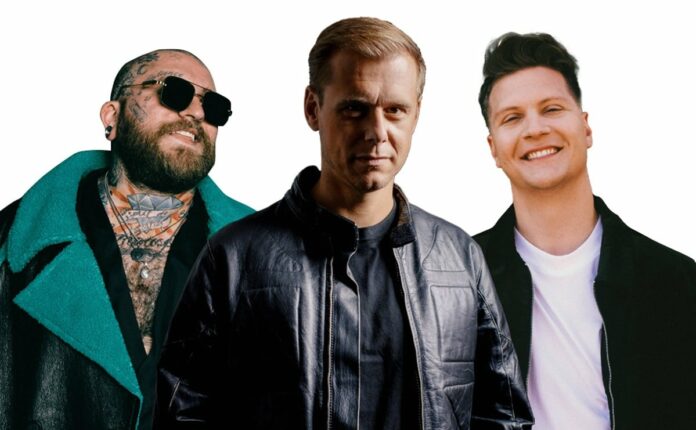 It takes only one look at Armin van Buuren’s voluminous discography to see the remarkable extent of his collaborative repertoire, and his new pop-inspired single on Armada Music might just be the most ear-popping addition yet.

‘Easy To Love’ sees the five-time #1 DJ in the world team up with Norwegian hitmaker Matoma and American singer-songwriter Teddy Swims, the latter of whom is able to flaunt a following of over 5 million fans between his YouTube and TikTok channels.

Talking of instant infatuation, ‘Easy To Love’ is oozing with hit potential. Flaunting atmospheric guitar tones, a steady rhythm and a rich vocal presence that elevates the song even further, this track is bound to resonate with anyone who’s ever fallen in love at the snap of a finger.

“I’m over the moon with this new collaboration,” Armin van Buuren says. “Working with other artists greatly inspires me, and joining forces with both Matoma and Teddy Swims really helped me get this song to where I wanted it to go. I hope everyone else will love it as much as I do.”

“From the beginning of my career, it has been a dream of mine to work with the legend that is Armin,” Matoma says. “I’ve also been obsessed with the unique emotion in Teddy’s voice since I first heard it. So to have this release bring these dreams together is just…wow!”

“I’ve been a long-time fan of Armin and Matoma, so it’s an honor and a privilege to get to work with both of them!” Teddy Swims concludes.

Armin van Buuren has long been a global ambassador for electronic music. The five-time #1 DJ in the world and current #5 has seven full-length artist albums to his name and continues to cultivate a massive worldwide following through his weekly A State of Trance radio show, event series and album series, reaching 40 million listeners from 80 different countries on a weekly basis.

Since making his debut in 2015, artist and producer Matoma has risen from a bedroom producer posting on SoundCloud to one of dance music’s biggest stars. Between his solo tracks, two albums and collabs with everyone from Dua Lipa to Snoop Dogg, the Norwegian artist amassed a staggering 2-billion-plus streams.

With this new chapter in his career, Matoma brings songs with the energy, irresistible melodies, and relatable stories that can get a party pumping, motivate your morning, or bring solace to sadness – cutting across genres but always connected by a sense of feel-good, everything-is-possible positivity.

Teddy Swims is a lover. The vocal powerhouse, who merges honeyed soul with raucous rock energy and pleasing pop hooks, writes nearly all his songs about falling in or out of romantic entanglements. “To me, that’s just all there is,” he says.

“You’re either making love or crying about it.” The Atlanta native, born Jaten Dimsdale, has been tugging at heartstrings since posting a series of covers from his bedroom studio in 2019, which generated hundreds of millions of views and scored him a deal with Warner Records.

Teddy changed his focus to introspective originals on 2020’s ‘Unlearning’ EP, garnering praise from American Songwriter, Billboard, and Rolling Stone, who named him an artist to watch in 2021. Soon thereafter, performances on The Kelly Clarkson Show, Today, and The Late Show With Stephen Colbert and opening for Zac Brown Band’s Summer arena tour cemented his status as a rising star.

2022 marked a banner year for Teddy with the release of his two latest EPs, ‘Tough Love’ and ‘Sleep is Exhausting’, collaborations with Meghan Trainor, ILLENIUM, MK, and BURNS, performances on Ellen, The Late Late Show With James Corden, and Jimmy Kimmel Live!, and his Tough Love headline world tour.

Also in 2022, a snippet of Teddy singing the Journey classic ‘Don’t Stop Believin’’ went viral with over 80 million views, and he released the full song and was invited to perform with Journey founder Neal Schon on America’s Got Talent.

With more than 750 million global streams to his credit, as well as a social following that exceeds 10 million, Teddy’s songs of devotion have clearly connected. Part of reaching that audience, for him, is getting to show his love in person. There are always more new friends to bare his soul to. “I’m so excited to meet people and shake hands and hug necks,” he says.