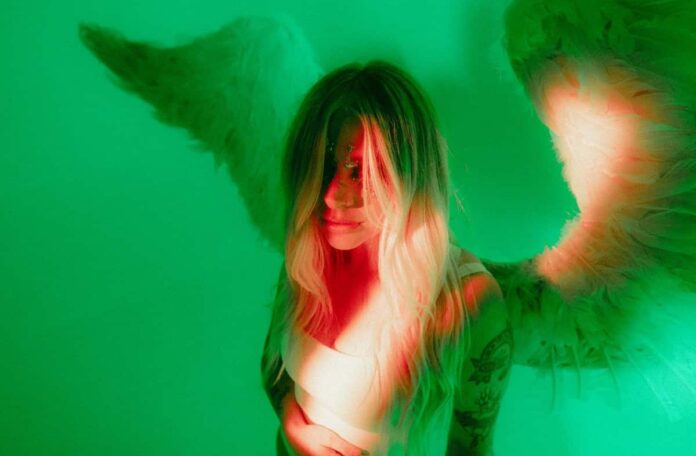 Falling into the orbit of her emotionally charged bangers, “Don’t Say” is a cathartic trap single that sneaks around as an alternative source for healing. Written from a place of excruciating heartache, ROSSY pulls from real-life experience to source the track’s compelling one-liner, sung by her personally.

The pitched-up vocal hook finds itself frozen in the fallout of a nasty breakup, looping hopelessly throughout the track’s entire duration, almost as if it’s trying to buy some time to cope with the bitter truth.

ROSSY coats the pain with her melodic production, which is punctuated by crisp breakbeat drums, chill-inducing arpeggiations, and a glorious, soaring synth lead. The whole experience feels akin to the act of handing one’s own personal grief over to a higher power.

The track has been a secret weapon in her sets for many moons. Dancing Astronaut earmarked the release in their ‘most anticipated IDs of 2022’ feature last year—which echoed her placement in their ‘Artists to Watch’ list that same year—sourcing footage from her Instagram post highlighting her set from RL Grime’s Sable Valley Community Outreach Tour stop at Echostage in Washington D.C. And the clamouring for its official release has not let up ever since.

Around the concept of her new single, ROSSY expresses: “I wrote ‘Don’t Say’ in 2020 during a tough breakup. I came up with the vocal line “don’t say I’m yours” because it felt so empowering and right to me at the time, and this track was a way for me to channel all the hurt, anger, and sadness into a beautiful melodic song. Creating this song was extremely therapeutic and healing for me, so this one is really special to me on many levels, and I really hold it close to my heart. I really want it to be a healing anthem for whoever needs it, and hope that other people can find solace in it, as well. I’m especially excited to release this with the HARD family, as HARD Summer was the first ever festival I attended as a baby raver back in the day. This is a beautiful full circle moment for me as I get to release a track that means so much to me with the people who helped me fall in love with this scene.”

Following on from her previous label singles “DEITY” and “KARMA” (with Jazz Cartier), the trap music phenom has been stacking up the hype to critical mass, drawing press support from Dancing Astronaut, Your EDM, This Song Slaps, Dubstep FBI, The Music Essentials, and more.

Spotted capturing hearts alongside bass heavyweights such as RL Grime, Illenium, GRiZ, Troyboi, and Flosstradamus, ROSSY boasts an extensive touring schedule with numerous appearances across the country, including previous festival performances at HARD Summer, Beyond Wonderland: The Gorge, Lost In Dreams, Audiotistic Bay Area, Moonrise, and the list seems to grow larger by the minute. ROSSY’s profile is only expected to explode even further in the coming months, having recently been announced on the line-up for the magical Electric Forest festival in Michigan, as well as support for REZZ at Red Rocks.

Deriving an angelic twist of atmospheres soaked in suspense, “Don’t Say” is a songbird from the heavens. As the sublime melodic trap single lightly massages your aural senses, the promise of enlightenment is starting to feel within arm’s reach as ROSSY’s forthcoming EP pokes its head around the corner.

ROSSY’s new single “DON’T SAY” is on all platforms via HARD Recs.